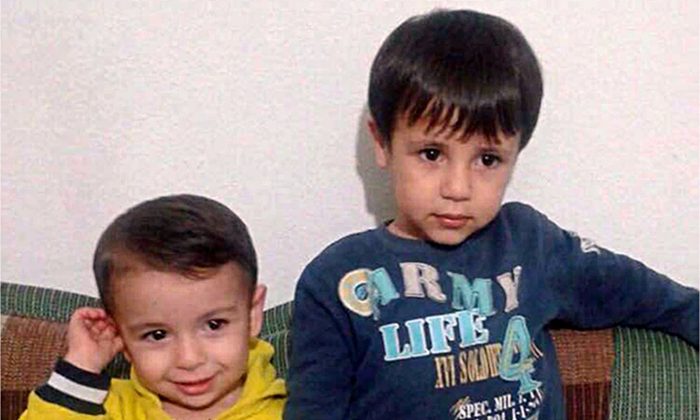 This handout photo courtesy of Tima Kurdi shows Alan Kurdi, left, and his brother Galib Kurdi. The body of 3-year-old Syrian Alan Kurdi was found on a Turkish beach after the small rubber boat he, his 5-year old brother Galib and their mother, Rehan, were in capsized during a desperate voyage from Turkey to Greece. (Tima Kurdi /The Canadian Press via AP)
Europe

KUCUK KENDIRLI, Turkey—The Syrian man who survived a capsizing during a desperate voyage from Turkey to Greece buried his wife and two sons on Friday in their hometown of Kobani, returning them to the conflict-torn Syrian Kurdish region they had fled.

With the burial, Abdullah Kurdi abandoned any plans of leaving his homeland again.

“He only wanted to go to Europe for the sake of his children,” said Suleiman Kurdi, an uncle of the grieving father. “Now that they’re dead, he wants to stay here in Kobani next to them.”

The haunting image of the 3-year-old Aylan Kurdi washed up on a Turkish beach focused the world’s attention on the wave of migration fueled by war and deprivation.

The three bodies were flown to a city near Turkey’s border with Syria, from where police-protected funeral vehicles made their way to the border town of Suruc and crossed into Kobani. Legislators from Turkey accompanied Abdullah Kurdi to Kobani. Journalists and well-wishers were stopped at a checkpoint some 3 kilometers (2 miles) from the border.

Scores of casually dressed mourners clustered around as the bodies were laid in the dry, bare earth of the Martyrs Cemetery. Clouds of dust rose as dirt was shoveled over the graves.

Some graves in the cemetery were haphazardly marked out with borders of concrete blocks.

Aylan’s body was discovered on a Turkish beach in sneakers, blue shorts and a red shirt on Wednesday after the small rubber boat he and his family were in capsized. They were among 12 migrants who drowned off the Turkish coast of Bodrum that day.

The route between Bodrum in Turkey and Kos, just a few miles, is one of the shortest from Turkey to the Greek islands, but it remains dangerous. Hundreds of people a day try to cross it despite the well-documented risks.

Abdullah Kurdi said the overloaded boat flipped over moments after the captain, described as a Turkish man, panicked and abandoned the vessel, leaving Abdullah as the de facto commander of a small boat overmatched by high seas.

In a police statement later leaked to the Turkish news agency Dogan, Abdullah Kurdi gave a different account, denying that a smuggler was aboard. However, smugglers often instruct migrants that if caught they should deny their presence.

A Canadian legislator said the family, fleeing the conflict in Syria, had been turned down in a bid for legal entry to Canada even though it had close relatives there offering financial backing and shelter, but Canada’s Department of Citizenship and Immigration later said the application was incomplete and did not meet regulatory requirements.