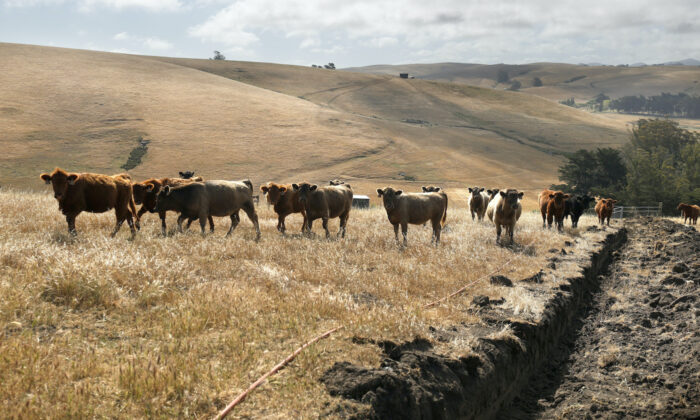 Cattle graze on dried grass at a ranch in Tomales, Calif., on June 8, 2021. (Justin Sullivan/Getty Images)
US News

Drought Forcing More American Farmers to Kill Their Own Crops

Severe drought is forcing many farmers in the United States to destroy their crops, according to the latest survey by the American Farm Bureau Federation (AFBF), a lobbying group representing agriculture interests.

The survey, conducted between June 8 and July 20, covers 15 states hit by extreme drought conditions and which collectively contribute to almost half of America’s agricultural production value. The states include north of Texas, up along the Central Plains to North Dakota and west to California. Thirty-seven percent of farmers are plowing through and killing existing crops because they won’t reach maturity due to dry conditions. This is up from 24 percent in 2021.

Similarly, 33 percent of respondents said they were destroying and removing orchard trees and other multiyear crops, almost double the 17 percent last year.

States with high fruit and tree nut crop production are seeing a higher prevalence of removal of orchard and multiyear crops. For instance, in Arizona and California, 40 percent and 50 percent of respondents, respectively, admitted to such a trend.

“In one case, a California producer mentioned dropping all fruit on five acres of young Cabernet grapes to help them survive with zero applied water over the last two years, removing all revenue-generating potential for the current year,” the survey report said.

In the surveyed region, respondents expect average crop yields this year to be down 38 percent due to drought conditions.

The severe drought has put many farmers in a challenging spot. “It’s extremely tough right now. We’ve been through lots of droughts before, but this one is unprecedented. You always get little showers off and on. But we haven’t had any showers to speak of at all. That’s the difference with this one,” Kyle Foster, a cattleman from Cross Plains, Tex., told The Epoch Times.

The wheat fields on his property are withering from thirst and the hay fields are at risk from drought and grasshoppers. Due to the drought, Foster is now forced to sell his cattle.

According to the AFBF survey, the vast majority of tree nuts, fruits, and vegetables in the country are sourced from drought-struck states. As a result, American consumers will likely have to pay more for such goods.

The drought conditions also risk global access to some food items. For instance, California alone accounts for 80 percent of the world’s supply of almonds. As the state suffers from drought and production declines, so will the availability of almonds.