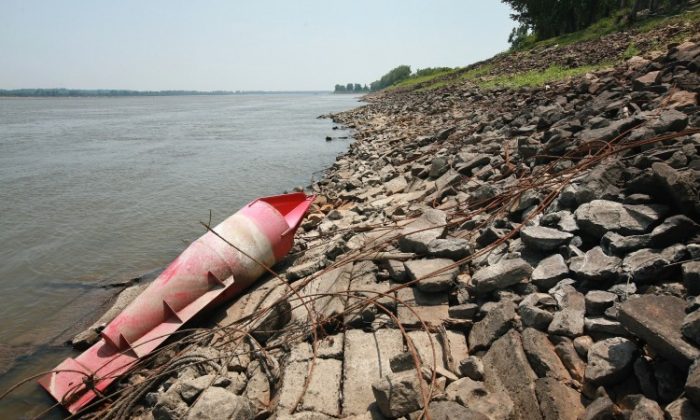 A buoy used to help guide barges rests on the bank after the water level dropped on the Mississippi River near Wyatt, Mo., this year. Some barge operators have lightened their loads or stopped running altogether because of low water levels. (Scott Olson/Getty Images)
US

Persistent drought conditions in the upper Midwest are threatening the nation’s waterways, with the mighty Mississippi River so low that barge traffic has been affected and may be forced to halt.

Over 90 barges have been either stranded or grounded due to low water in recent weeks, according to the Waterways Council Inc. (WCI), a public policy organization representing shippers and ports.

Low water levels are also likely to increase due to continuing dry conditions, compounded by the actions of the U.S. Army Corps of Engineers, who have orders to reduce water flow from the Missouri River into the Mississippi.

“This could be a major, major impact at crisis level,” said Debra Colbert, senior vice president of WCI, according to Associated Press. “It is an economic crisis that is going to ripple across the nation at a time when we’re trying to focus on recovery.”

The main river in America’s largest river system, the Mississippi cuts through, or borders, 10 states, incorporating both the Missouri and the Ohio rivers as it travels from Minnesota in the north to the Gulf of Mexico in the south.

According to Veronica Nigh, an economist with the American Farm Bureau Federation (AFBF), the impact on freight is critical. Around 60 percent of U.S. corn and 45 percent of soybeans travel down the Mississippi for export. Coal, fertilizer, gas, and oil go up the river on the return journey.

“We’re experiencing water levels that have really been unprecedented for the last 50 or 60 years,” Nigh said on the AFBF website. “We’re getting close to the record low for the Mississippi that was set in 1940.”

“With these low water levels, barges are only being loaded to 70 to 75 percent of their normal capacity,” she said.

According to Nigh, transportation by barge is cheaper and more efficient, one barge moving as much tonnage as 70 trucks.

It “saves consumers money, because they pay less for their products. It helps farmers. It helps businesses stay competitive in an export market,” she said.

The National Weather Service has predicted “drier than average conditions” over winter for upper Midwest states. This will particularly impact the critical 180-mile stretch of river between the mouth of the Missouri River just north of St. Louis and the mouth of the Ohio River, an area that will be impacted by Army Corp of Engineers (USACE) plans.

The USACE, which manages the waterways, will reduce the amount of water released into the Mississippi from Gavins Point Dam on the Missouri River in South Dakota. The Missouri River provides around 60 percent of the water into the Mississippi but it is also impacted by the drought, and the Army corps says it is obliged, under orders from Congress, to ensure the smaller river remains at a certain level.

Maj. Gen. John W. Peabody, commander of the Mississippi Valley Division of the USACE, said the corps has been dredging continuously since July in an attempt to keep waterways clear, and has also been storing water where it can. Water stored in an area north of Iowa will be released, and the impact noticeable in about 3 weeks, he told the St. Louis Post-Dispatch.

“We have to start thinking that we may not be able to have the water we are accustomed to for an extended period of time,” Peabody said. “That means we are going to have to husband our resources for when the situation gets truly dire. And in my personal estimate, we are not there yet.”

“Such wide variations in stages over successive years have never before been witnessed,” the report states.

Dr. Jeff Masters, meteorologist with the Weather Underground, says the drought impacting the United States this year is the worst since 1954. While damage costs from the impact of Hurricane Sandy are likely to be high around $50 billion, Masters says the cost of the 2012 drought will be higher, with estimates ranging between $75 and $150 billion.