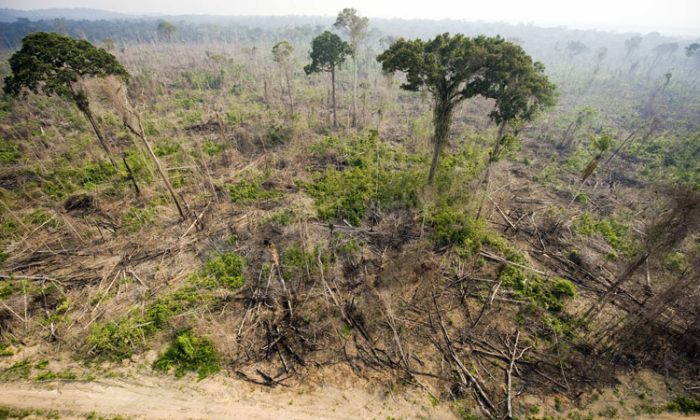 Aerial view of a burnt out sector of the Jamanxim National Forest at an illegal settlement November 29, 2009, in the Amazon state of Para, nothern Brazil. (Antonio Scorza/AFP/Getty Images)
Environment

Deforestation and fragmentation of forests in the Amazon help create tinderbox conditions for wildfires in remnant forests and contribute to rapid and widespread loss of trees during drought years, researchers say.

The findings show that forests in the Amazon could reach a tipping point when severe droughts coupled with forest fires lead to large-scale loss of trees, making recovery more difficult.

“We documented one of the highest tree mortality rates witnessed in Amazon forests,” says Jennifer Balch, assistant professor of geography at Penn State.

“Over the course of our experiment, 60 percent of the trees died with combined drought and repeated fire. Our results suggest that a perfect firestorm, caused by drought conditions and previous fire disturbance, crossed a threshold in forest resistance.”

Climate change is expected to warm the air in the Amazon region by several degrees and substantially reduce regional precipitation, making understanding the interactions between droughts and fires even more important, Balch says.

“However, even before any prediction of Amazon climate warming occurs, our study demonstrates that drought and fire are already driving forest dieback.”

The eight-year study is the largest and longest-running fire experiment in tropical forests. The team of researchers burned 50-hectare forest plots in the southeastern Amazon, a region prone to the effects of climate change.

The plots were burned every year, every three years, or not at all. The timeframe for the study included 2007, a year of severe drought. By comparing the tree deaths for the plots each year, the researchers could assess the effect of drought on fire intensity and tree deaths.

“Four times more adult trees were killed by fire during a drought year, which means that there was also more carbon dioxide released to the atmosphere, more tree species loss, and a greater likelihood of grasses invading the forest.”

Fragmented forests are more susceptible to the negative impacts of drought and fire and drought leads to an increase in fuel such as leaves and branches. The findings are key, in part, because most climate change models have not included the impacts of fires on Amazonian forests.

“Basically, none of the models used to evaluate future Amazon forest health include fire, so most of these predictions grossly underestimate the amount of tree death and overestimate overall forest health,” says Michael Coe of Woods Hole Research Center.

Fire as a forest management tool can contribute to an increase in severe fires because the resulting thinner canopy leads to drier forest conditions. This lack of humidity does not dampen fires but does encourage airflow between fields and forests. Fragmented forests also have more edge space, which is susceptible to both fire and invasive grasses—another potential fuel.

“Efforts to end deforestation in the Amazon must be accompanied by programs and policies that reduce the accidental spread of land management fires into neighboring forests and effectively control forest fires when started,” the authors write in the Proceedings of the National Academy of Sciences.

The results are important because large portions of the Amazon forest already experience droughts and are susceptible to fire—they are broken into smaller blocks by agriculture and they are close to humans, who are the predominant source of fire in the Amazon. NASA satellite data provided regional context for results from the experimental burns.

“These smaller forest fragments have more edges than large blocks of forest, which exposes them to the hotter, drier conditions in the surrounding landscape and makes them more vulnerable to escaped fires,” says coauthor Marcia Macedo of the Woods Hole Research Center.

By 2011, around 8 percent of Southeast Amazonia’s forests were less than 328 feet from an agricultural or pasture clearing. This lattice-like network of degraded forest edges is now extremely susceptible to future fire.