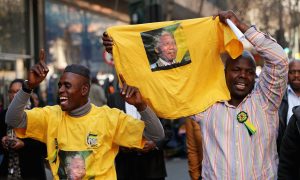 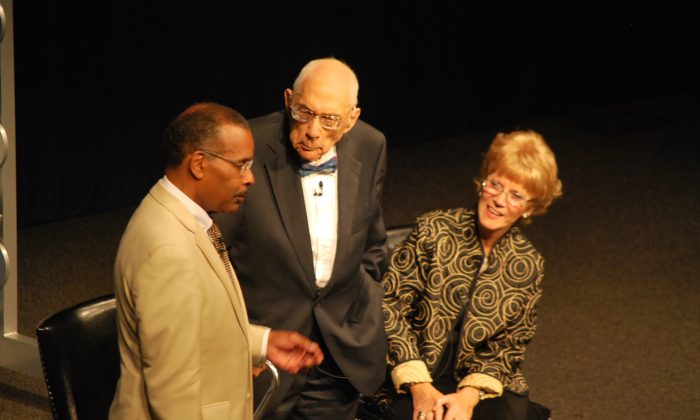 Simeon Booker (Center), joined by his wife, shares what it was like to be a journalist during the Civil Rights movement in the early 1960s with Joe Madison, Sirius XM satellite radio host and civil and human rights activist, at the Newseum in Washington, D.C., on Aug. 22, 2013. (Ron Dory/Epoch Times)
US

Has African-American media dropped the torch passed down from the journalists who faced fire hoses and attack dogs in delivering the historic images and stories of the civil rights movement?

A woman posed this question to Simeon Booker, former editor-in-chief of Jet Magazine and the first black staff journalist at the Washington Post, at a discussion titled Covering Civil Rights: On the Front Lines at the Newseum in Washington, D.C., on Aug. 22.

Prior to the discussion, Ingrid Saunders Jones presented Bernice A. King with an award. King is the daughter of the civil rights leaders Martin Luther King Jr. and Coretta Scott King as well as CEO of the King Center, a 23-acre national historic site that commemorates nonviolent social change.

Although Booker did not say that a torch has been dropped, he did concede: “Ebony and Jet don’t cover news as vigorously. We’ve got to get more people aboard,” he said, referring to coverage of civil rights in black communities.

“If you didn’t see it in Jet, it didn’t exist,” said Madison.

In posing her question, the young woman referenced the Trayvon Martin case and a case in Florida in which a white man shot a black 17-year-old at a gas station over a confrontation about the loud music that he was playing in the car with his friends.

In November 2012, Michael Davis Dunn was stopped in his car alongside an SUV occupied by Jason Davis and three other young men at a gas station in Florida.

Dunn told the young men to turn down their music, according to Dunn’s statements to the police. The young men turned off their music. One of them became angry and started swearing, and they then turned the music back on. Dunn told police that a young man in the back seat reached down for what he thought was a shotgun, which prompted him to shoot four times, killing Davis. He then shot another four times as the young men fled the scene in their car.

Dunn told police that following the incident, he returned to his hotel with his girlfriend and ordered a pizza. The police did not find a weapon in young men’s, vehicle, according to reports. Dunn never called police and was arrested the following day in his hometown. He faces first-degree murder charges, and his trial is scheduled for next month.

Florida’s Stand Your Ground law may be tested in the trial.

The Davis case has not generated the media attend that the Trayvon Martin case has, despite similarities between the two cases.

However, people such as the young women at the discussion in the Newseum would argue that the public outrage that followed the Martin case should also follow the Davis case and the Roy Middleton case, but those cases have not been covered as thoroughly. A 60-year-old Middleton black man, was recently shot in the leg twice when police officers fired at him 15 times in his own driveway in Pensacola Fla., on July 22. Police officers allegedly mistook him for a burglar.