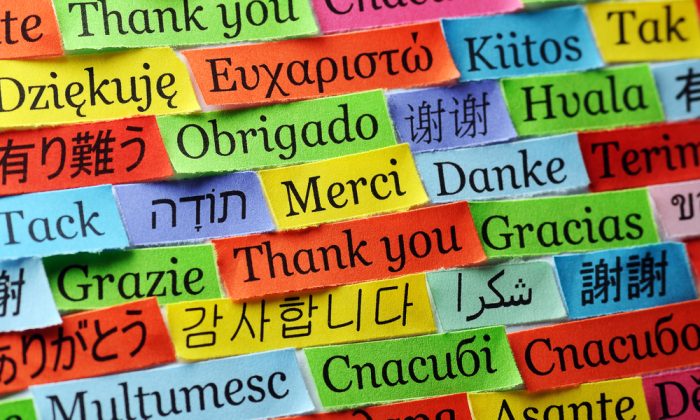 There are now more than 1.1 million children in our schools whose first language “is known or believed to be other than English” according to the latest government figures. This confirms a continuous upwards trend that shows no sign of abating.

Many of the 300 or so languages spoken in schools have relatively few speakers but about 20 languages are spoken by 10,000 or more pupils. These children represent a considerable resource. But we are not making the most of it and are even cutting specialist language support for these pupils.

Report after report from the British Chamber of Commerce to the Confederation of British Industry stresses the need for employees with good foreign language skills. Businesses bemoan the fact that the current lack of language skills is a significant barrier to them even attempting to do deals overseas.

Over the last 15 years, more than a third of UK universities have stopped offering specialist modern European languages degrees, with all the loss of skills that implies.

Optimists at the Department for Education point to healthy rises in the uptake of GCSE foreign languages following the introduction of the English Baccalaureate league table. But while this level of qualification may equip you to order a Bratwurst in a Berlin Bierkeller, it won’t be enough you sell your goods to the German businessmen sharing your table.

And yet, if we look at figures on the dozen or so largest languages spoken in schools, we’ll find a potential talent pool just waiting to be tapped.

One of the main problems are the negative signals sent out whenever news of the growing linguistic diversity in our schools hits the press. This happened earlier this year over reports that one in nine schools had a majority of students whose first language was other than English.

This generally leads to an entirely false assumption that these students don’t speak English, accompanied by predictable outcries about the negative impact of immigration on standards in our schools. In fact, my research has found that of the ten schools with the highest proportion of bilingual students all but two were rated as outstanding or good by Ofsted.

Chinese students are our highest performing group and the presence of so many Polish students has helped improve the position of many of our Catholic schools in the league tables, as shown by a study carried out by the LSE in 2012.

And the 2012 Programme for International Student Assessment (PISA) tests carried out by the Organisation for Economic Co-operation and Development, showed that the performance of “immigrant” (first or second generation) students in the UK overall was not statistically different from that of “native” students. They were only six points adrift on the mathematics test when socio-economic factors were accounted for. This compared with the OECD average of 34 points lower for immigrant students overall.

Yet massive cuts to specialist provision in schools and local authorities for the teaching of English as an additional language seems likely to reverse that trend, as the National Association for Language Development in the Curriculum has warned.

We need a much better understanding about what that label “language other than English” actually means. Students with English as an additional language come in all shapes and sizes, from absolute beginners to students who were born in the UK and have had all their education here.

The problem is the UK does not have any standardised way of assessing their ability in English (unlike other places such as Canada and Australia, both of which were ranked much higher than the UK in the 2012 PISA tests). Unless we develop a curriculum that recognises that we not only live in a multilingual world but also in a multilingual Britain, then we will be selling all our children and all our futures short. The revised National Curriculum, with its ever narrowing focus on “little England” seems unlikely to deliver the goods.

Fortunately, it’s not all doom and gloom. Whilst politicians and pundits may fret endlessly and needlessly over the impact of plurilingual students in our schools, the teachers, students and their families and neighbours are just getting on with it.

Research projects carried out by Charmian Kenner and colleagues at Goldsmiths College in London and Angela Creese and her team at the University of Birmingham are involving communities to explore the ways people are actually building on all the languages in their environment to get things done. The evidence so far suggests that everybody gains as a result.

People tend to forget that it was monolingualists who built the tower of Babel – let’s not blame multilingualism for its downfall.

Frank Monaghan is a member of the Executive Committee of NALDIC (the UK English as an additional language professional association). This article was originally published on The Conversation. Read the original article.

*Thank you cards via Shutterstock.