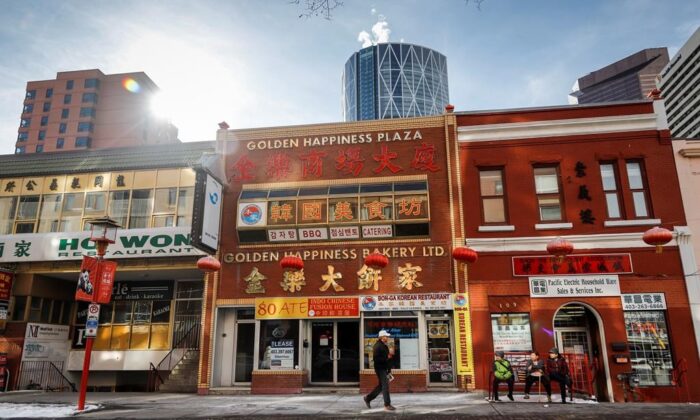 Drop in Business Across Canadian Chinatowns Due to Coronavirus

Most of Calgary’s city councillors had lunch at a restaurant in Chinatown this week to try to help reduce fears about the new coronavirus.

Businesses in Chinatowns across Canada have reported a drop in activity since COVID−19 hit China in January and started to spread around the world.

At Ho Wan Restaurant in Calgary, the owners’ son, Jason Zhang, says business is down about 70 per cent.

“People are not coming out very much,” he said in an interview. “It was the slowest Family Day I’ve seen.

“It’s hard to predict when people come out … but, in general, especially during the regular times, it’s just a percentage shock.”

“Business in Chinatown is way down—in some restaurants 70 to 80 per cent,” she said. “It’s a dreadful burden on the businesses, so we wanted to show our support and encourage Calgarians to stand behind their local businesses, especially in Chinatown.”

There have been no cases of COVID−19 in Alberta, but there are 12 confirmed cases in Ontario and British Columbia. Around the world, about 81,000 people have become ill with the virus. The World Health Organization is reporting cases in 37 countries outside China.

Concerns about a decline in visitors have been reported in Chinatowns across North America.

In the United States, there’s a campaign in New York to “Show Some Love for Chinatown.” Food crawls have been arranged to help Chicago’s Chinatown and Democratic House Speaker Nancy Pelosi visited San Francisco’s Chinatown District on Monday to try to quell fears.

Chinatown businesses in Vancouver, Edmonton and Toronto have all reported a decline in customers.

Alex Wang, who runs the Peninsula Seafood Restaurant in Vancouver, told Global News he has seen business drop more than 70 per cent and is worried the restaurant won’t be able to survive longer than three months.

In Edmonton, the chairwoman of the Chinatown and Area Business Association said there’s been a noticeable decline in activity this winter.

“There’s a general fear out there with the coronavirus,” said Holly Mah.

Some of that drop, she said, could be related to the generally slower winter season and Alberta’s sluggish economy.

Toronto’s Chinatown has also noticed a decline in customers.

“It’s a concern,” said Tonny Louie, chairman of the Chinatown Business Improvement Area. “People, in the back of their minds, they still wonder what will be next. This virus … is pretty hard to contain.”

He said business has picked up in the last couple of weeks, but noted streets were quiet after the first patient was admitted to hospital in Toronto.

“It was completely desolate for a week and a half,” he said. “No cars at all. And there’s all kinds of parking spots in Chinatown, so that means people were not coming in.”

Louie said some people have started to return, but there’s a dip every time there’s bad news.

“Not a lot of facts are known,” he said. “So far, they haven’t been able to identify a vaccine or a cure for it, other than go home and get rested up and isolate yourself and wash your hands.”

Louie said the group will be handing out hand sanitizer and dispensers to all businesses to help ease fears.

“Right now, the only possibility that they are talking about catching it is with hand touching and contact, so we can solve that problem at least.”

“Practice good infection prevention habits,” Dr. Deena Hinshaw, chief medical officer of health, said in Edmonton. “Protect others by staying home when you are sick and covering coughs and sneezes.

Hinshaw said the risk in Alberta remains low and there is no need to stay home or avoid public places.

Farrell said she will continue to tell people about her favourite spots in Calgary.

“Chinatown is filled with family-owned restaurants and we need to support them or lose them,” she said. “It is a treasured community.”