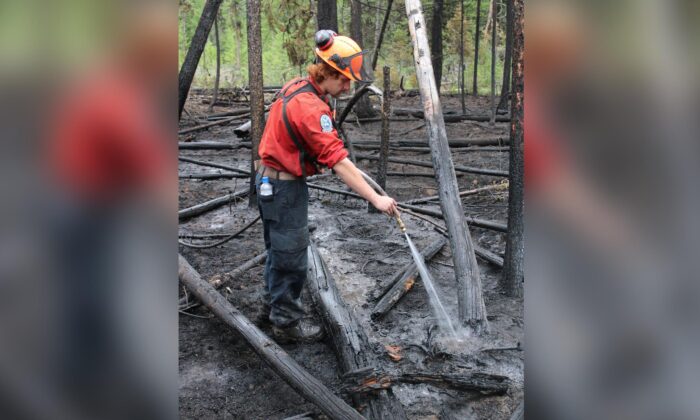 A crew member works at the Watching Creek fire in British Columbia in an Aug.5, 2022 handout photo. (The Canadian Press/HO/BC Wildfire Service)
Canada

Drones are helping map hot spots in a wildfire blazing on the fringes of British Columbia’s Okanagan region, as cooler and calmer conditions help firefighters bring blazes elsewhere under control.

Crews are making progress on several wildfires, including a blaze near Lytton that broke out nearly a month ago and destroyed several properties, and which is no longer being designated a wildfire of note.

But BC Wildfire Service information officer Mikhail Elsay told a news conference that the large fire about 21 kilometres southwest of Penticton in the Okanagan is still out of control, having scorched more than 68 square kilometres.

Elsay says new drone technology is being used to scan the fire’s edges to make sure flames are put out.

He says crews are making progress and some people in the area can get back home.

Evacuation orders have been rescinded for properties from Twin Lakes to just north of Olalla, including some homes along Sheep Creek Road, although Highway 3A will remain closed.

Nearly 500 properties in the area are under an evacuation alert, which means residents have to be ready to leave on short notice.