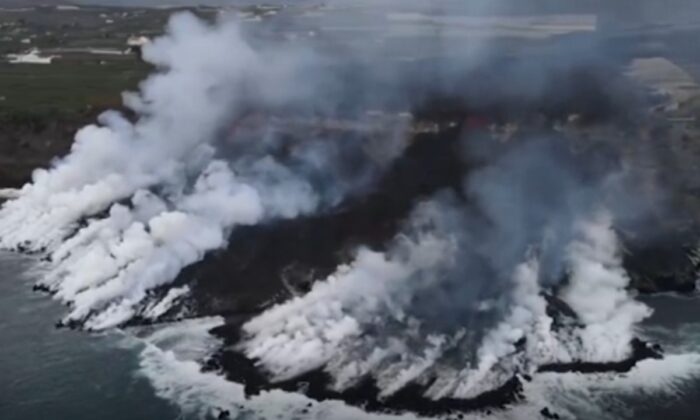 Aerial shot of lava plunging into Atlantic Ocean, from the volcano on the Spanish island of La Palma, in a still image from real-time camera footage released by AP. (Spanish Institute of Mining And Geology via AP/Screenshot via The Epoch Times)
Europe

Aerial footage filmed on Tuesday by geology experts studying the volcano on the Spanish island of La Palma showed the extent of a new lava delta that was created in recent days.

The lava flow, which is the third to reach the Atlantic Ocean, first dropped off a cliff and into the sea on Monday.

The Spanish Institute of Mining & Geology, which shot the video, said the amount of vapor being released has declined, as the volume of lava interacting with the sea has decreased.

Around 85,000 people live on La Palma, though most of the island is unaffected by the eruption.

More than 7,000 people have been evacuated from their homes due to the threat from the rivers of lava.

The molten rock has covered more than 997 hectares (2,463 acres) and crushed or damaged more than 2,200 buildings.