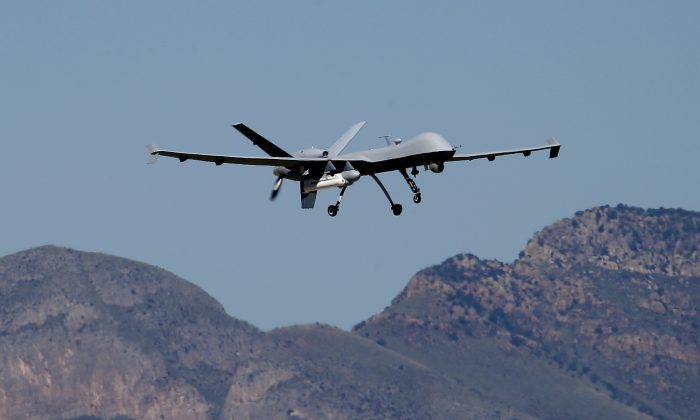 Drone Airport in Texas: Army Setting Up Base that Only has UAVs

The US Army is reportedly going to set up a drone-only “airport” in Texas.

“The Army’s ever-growing use of unmanned aerial systems has gotten to the point where two of the most commonly used UAS are getting their own airport,” says a report from DefenseSystems.com.

The Army Corps of Engineers based in Fort Worth, Texas, gave out a $33 million to SGS to built the airport, which will be 150 acres in size. The facility will be a launch and recovery complex at Fort Bliss for the Gray Eagle and Shadow UAS drones, added the report.

A 50,000-square-foot UAV maintenance hangar will also be on site. The airport will have more than a mile of taxiways, aprons, and runways for the drones.

The Gray Eagle, or specifically the MQ-1C Gray Eagle, is for combat and is an upgrade over the well-known MQ-1 Predator. General Atomics is the manufacturer.

The 56-feet-wide and 28-feet-long drone has four AGM-114 Hellfire missiles or eight AIM-92 Stinger missiles. It also has four bombs.

The RQ-7 Shadow UAS, made by AAI, is a reconnaissance drone. The 11-foot-long and 14-foot-wide drone doesn’t usually have any weapons.

The complex will include a 50,000-square-foot unmanned aircraft maintenance hangar and more than a mile of runways, aprons, and taxiways, according to an announcement from the company. The runways will include a 5,000-foot runway for the Gray Eagle and a 1,000-foot runway for the smaller Shadow. In addition to maintenance shops, administrative space and storage space in the hangar, the facilities also will have a 5-ton bridge crane, oil/water separator, aircraft container and forklift storage, taxiway, access apron, oil and hazardous waste storage buildings, vehicle storage facilities, organizational vehicle parking, and overhead protection/canopy.

It’s unclear how many of the UAVs the airport will actually house at a given time.