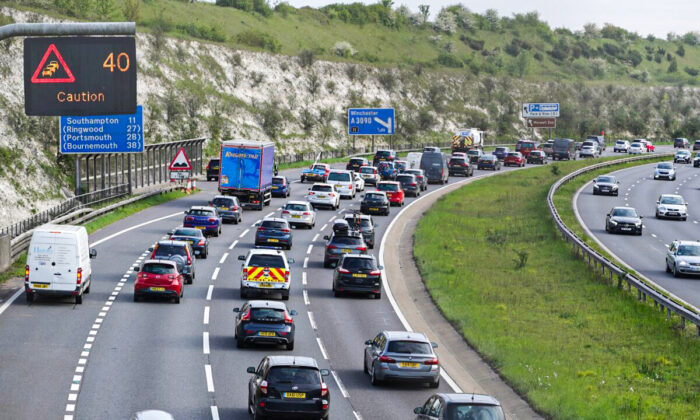 Traffic builds up on the M3 southbound heading towards the coast, at Winchester, in Hampshire, UK, on May 28, 2021. (Steve Parsons/PA)
UK

The arrival of half-term in England and Wales is expected to lead to an “autumn rush” on the roads in the coming days.

An estimated 19.4 million separate leisure trips by car will take place in the UK between Friday and Sunday, according to the RAC.

A survey of 1,400 drivers indicated that Saturday will be the most popular day with 5.6 million journeys, followed by Sunday (4.6 million) and Friday (4.3 million).

An additional 4.9 million so-called getaway journeys are planned to take place across one of the three days.

Friday is the final day schools are open before the half-term break in many parts of England and Wales.

Devon and Yorkshire are the most popular destinations, followed by Norfolk or Suffolk, Dorset, Blackpool, and the Lancashire coast, and Cornwall.

The poll suggested that the COVID-19 pandemic is not putting drivers off making leisure trips as much as it did earlier in the year.

Just 6 percent of respondents questioned earlier this month listed the virus as the reason for not going away this half-term, compared with 10 percent in relation to the August bank holiday weekend and 18 percent ahead of the May Day bank holiday.

RAC Breakdown spokesman Rod Dennis said: “Summer might be long gone but these figures suggest there might still be something of an autumn rush on the roads in the coming days as millions of drivers look to get away for the half-term holidays.