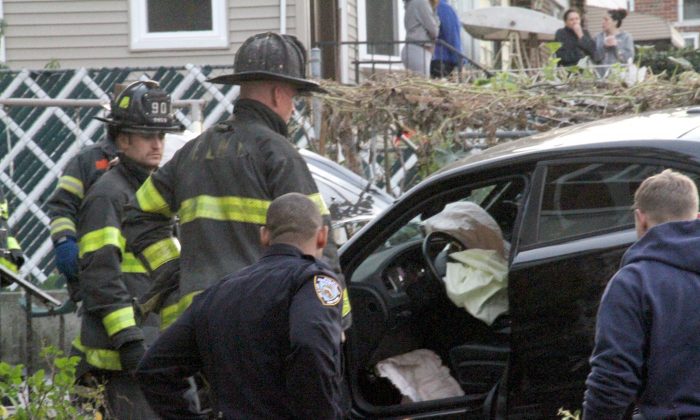 First responders examine an automobile after its driver lost control and plowed into a group of trick-or-treaters in New York, Saturday, Oct. 31, 2015. Three people were killed, including a 10-year-old girl. Several others were injured. (AP Photo/David Greene)
Crime and Incidents

NEW YORK—Police on Monday were still trying to determine what caused a motorist to jump a curb and hit trick-or-treaters on Halloween, killing three, and if the man should face charges.

Investigators were focusing on the medical history of the 52-year-old driver in the crash that killed a 10-year-old girl, her grandfather and a third person, Police Commissioner William Bratton said. There were reports that he’s had seizures in the past, Bratton added.

As the investigation continued, mourners remembered the victims.

“I had a lot of dreams for Nyanna. I had so many plans for her,” Natalia Perez said the day after her daughter, Nyanna Aquil, was pronounced dead at a hospital. Nyanna’s 3-year-old sister also was hospitalized.

Perez’s 65-year-old father, Louis Perez, suffered severe head trauma and died at the scene Saturday night when the car jumped a curb in the Bronx, leaving behind mangled bodies and bloodied costumes as neighbors ran to help.

Another man, 24-year-old Kristian Leka, also was killed. His 9-year-old sister and a 21-year-old female friend were injured but not critically.

A preliminary investigation showed the car was not speeding at the time of the crash, and no drugs or alcohol were found in the driver’s system, police said.

The black Dodge Charger plowed into the pedestrians on a sidewalk and then smashed through a fence in front of a home, police said. The driver was taken to the hospital in stable condition.