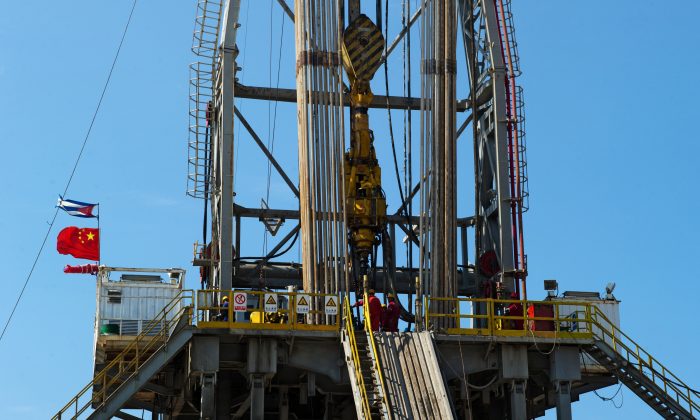 View of an oil rig operated by Cuba and China, on April 18, 2011, in eastern Havana. China has bought up resource assets and foreign companies in a bid to source raw materials and technology. U.S. citizens and officials are weary of this strategy in the United States. (Adalberto Roque/AFP/GettyImages)
Business & Economy

Drivers and Dangers of Chinese Investment in the US

China is buying the world, or so the rumor goes. To satisfy its endless need for natural resources, Chinese companies have spent billions of dollars buying up mines, oil rigs, and other resource assets mostly in Africa. When it comes to the United States, however, Chinese investors are less welcome.

U.S. citizens are generally skeptical; they fear the transfer of American know-how and technology and the offshoring of entire companies to China, which entails the loss of American jobs.

A recent survey, conducted in mid-May by the Washington-based Hill+Knowlton Strategies (H&K Strategies) company, found that many U.S. citizens believe that no country poses as much of an economic threat to the United States than China.

About one-third of survey respondents are not at ease when it comes to Chinese investments in the United States. Unease with Chinese investments does not center on one particular industry, but many, including infrastructure development, the energy industry, manufacturing, and real estate.

“We have seen growing distrust toward companies in general in recent years, and that distrust is especially acute for companies with Chinese investors,” says Robert Ludke, senior vice president at H&K Strategies.

Popps suggested that actions by the U.S. Committee on Foreign Investment in the United States (CFIUS) harmed U.S. security because of its “ineffective and flawed” practices.

Explaining his assessment of CFIUS, he pointed to a recent sale of A123 Systems, a bankrupt former U.S. Department of Defense contractor, to the Wanxiang Group Corp., a Chinese automotive company that has ties to the Chinese Communist Party.

Despite objections by the U.S. Army and other federal agencies, as well as a congressional inquiry, CFIUS concentrated only on economic benefits and ignored the U.S. security issue completely.

“China is not a free trade state. Trade with China is different. … We should not be fooled by the duality that, to the West, Chinese firms present themselves as capitalist free trade entities,” Popps stated.

How Chinese Investment Affects US Competition

There are “three areas in which Chinese investment may undermine U.S. competitiveness and economic opportunities,” testified Elizabeth J. Drake, partner of law firm Stewart and Stewart, during the U.S.-China Commission hearing.

The first factor is price competition. The Chinese regime supports investments made by its companies in foreign countries. Money for these investments is drawn from an investment fund with a very low interest rate. This arrangement is not available to companies competing with the Chinese firms, which borrow at market rates. No U.S. law exists to protect a U.S. company facing such competition.

In addition, by operating from inside the United States, the acquired companies can escape the anti-dumping duties or countervailing remedies. Such remedies are used only against foreign-based companies. Chinese companies also can buy their raw materials from firms in China at a disadvantage to U.S. suppliers.

Lastly, Chinese companies will transfer equipment and technology to China once they have acquired a company, which has been proven in many instances.

For example, Magnaquench, once the only U.S. manufacturer of magnets used in motors, MRIs, and wind turbines, was sold to a Chinese state-owned enterprise (SOE) in 1995. As soon as a five-year moratorium for keeping production in the United States had elapsed, the equipment was moved to China. By 2007, there were 130 companies producing the product in China and none in the United States.

Andrew Szamosszegi, principal of Capital Trade Inc., testified before the commission that the Chinese state has no other choice than to invest in the United States, given the significant trade deficit between the two countries.

“[T]he United States must import capital and … China has trillions of dollars that it must recycle into U.S. assets. The Chinese government traditionally invested these dollars in U.S. government debt but several years ago decided to diversify its asset base into other U.S. investments,” Szamosszegi stated.

In addition, Chinese companies are increasingly facing more anti-dumping and countervailing duties, and thus losing market share as their products become more expensive. By investing in U.S. domestic industries, the Chinese firm can increase its market share instead of being sanctioned by the World Trade Organization.

Another main driver for Chinese investments is gaining access to American technology and strategic assets, and thus the ability to bring the Chinese know-how up to par with the United States, a process infamously dubbed “reverse engineering.”

“Analyzing Chinese investment in the U.S. is challenging due to lack of reliable and timely data sources,” testified Thilo Hanemann, director at Rhodium Group LLC, at the U.S.-China Commission hearing.

Official data monitors of Chinese investments in the United States are outdated, given that the latest information is from the beginning of 2012. Furthermore, official data often does not provide ownership information.

Neither the Chinese statistical agencies nor the U.S. Bureau of Economic Analysis provides details concerning investments.

In response, the U.S. private sector has established alternate databases with material taken from regulatory filings, media publications, and other merger and acquisition databases. For example, one such database is the China Investment Monitor, developed by the Rhodium Group.

There are many reasons why the U.S. public and many officials are suspicious of China’s investments in U.S. companies. Rules and regulations may reduce some of the fears, but can’t provide a comprehensive solution. Unless China ultimately mends its ways, such sentiment will fester and grow.