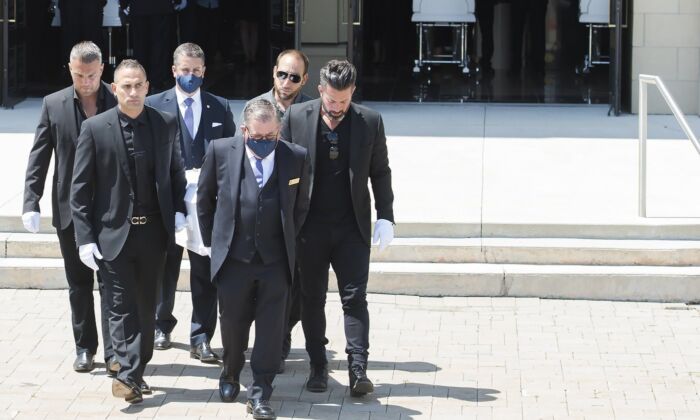 A driver who struck and killed a woman and her three young daughters in Brampton, Ont., two years ago is challenging his conviction on drug-impaired driving charges as well as his sentence.

In a notice of appeal filed last month, Brady Robertson’s lawyer alleges the trial judge was wrong to uphold the constitutionality of Canada’s law setting out a legal limit for THC blood concentration when driving.

The notice says Robertson is seeking to have the section of the law relating to THC blood concentrations declared invalid and his convictions on impaired driving quashed.

Robertson, 22, was sentenced in May to 17 years in prison, minus nearly three years in credit for time already served. He’s also barred from driving for 20 years after his release.

Robertson had pleaded guilty to four counts of dangerous driving causing death in connection with the June 18, 2020 crash that killed Karolina Ciasullo and her daughters Klara, Lilianna and Mila, who were between the ages of six and one.

But he pleaded not guilty to four counts of operation while impaired by drugs causing death, and his lawyers challenged the constitutionality of the law on drug-impaired driving.

The constitutional challenge argued that the limit of five nanograms of THC per millilitre of blood within two hours of driving is arbitrary and overbroad because it doesn’t correlate to impairment.

During trial, Ontario Court Justice Sandra Caponecchia found Robertson had a blood THC concentration of 40 nanograms of THC per millilitre of blood about 45 minutes after the crash, which is eight times the legal limit. The verdict on the impaired driving charges hinged on her findings in the constitutional challenge.

Caponecchia ruled earlier this year that the limits imposed by the law are “neither arbitrary, nor overbroad,” and noted a blood sample can only be seized when there are reasonable grounds to believe an offence has been committed. As a result, Robertson was found guilty on the related charges.

He was also found guilty of dangerous driving in another crash that took place on June 16, 2020.

Robertson is also seeking leave to appeal his sentence, arguing in the notice that the one imposed is “unfit and unduly harsh.” The document also argues Caponecchia erred by ignoring the principle of precedent in sentencing.

The document further argues the judge erred in finding the principle of restraint, which states that the least severe but reasonable sentence should be imposed, did not “play a role in sentencing a youthful and Indigenous person.”

It argues the sentence should be reduced to one that is “fit.”

During sentencing submissions in April, the Crown and defence each referenced the case of Marco Muzzo, a drunk driver who killed three children and their grandfather in a 2015 collision in Vaughan, Ont.

He was sentenced to 10 years behind bars and a 12-year driving ban, and was released on parole last year.

Caponecchia highlighted several differences between the two men and their actions as she sentenced Robertson in May.

The judge also noted that federal legislation in 2018 increased the maximum penalty for dangerous driving causing death to life in prison, and created new offences for cannabis-impaired driving, which can also carry a sentence of life imprisonment in cases where someone is killed. She said the changes suggest Parliament wanted those offences to be punished more harshly.

Robertson’s lawyer did not immediately respond to a request for comment Thursday.