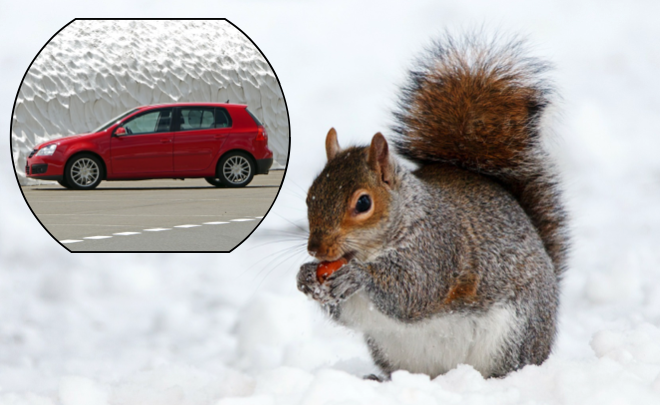 A UK man's car troubles turned out to have been caused by hundreds of acorns stashed in his gearbox––possibly by a squirrel. (Stock photos via CC0)
Autos

A British man took his car to a mechanic after it wouldn’t change gears properly and got some surprising feedback—the problem was caused by a cache of acorns, possibly stashed by a hungry squirrel.

Andy Wilkins had been on a five-week vacation, leaving his Volkswagen Golf not far from the airport in Gatwick, near London, the Sun reported.

But when he returned, the vehicle wasn’t shifting gear properly, so he took it to to a garage to get it looked at.

The mechanics inspected the car and made an unusual find.

“Half an hour later I got a call saying the car was stuffed full of acorns,” the 25-year-old real estate agent from Reigate, Surrey, told the Sun.

Wilkins was reportedly charged £168 for the repair, which included the removal of  “acorns from the gearbox linkage housing.”

A social media review suggests the squirrel may not have been the first animal to take a liking to his  car.

It isn’t the first time acorns have been documented causing mysterious problems for motorists.

Earlier in 2017, Pat Cotham of North Carolina heard unusual noises coming from under the hood of his car.

Inpection revealed a rodent had become trapped in the air conditioning system.

Even after the dead rat was removed, however, the unusual sounds didn’t stop.

“After I had the dead rat removed from my car air-conditioner the noise continued,” Cotham, who is County Commissioner in Mecklenburg County, wrote on social media.

Apparently, the critter had similarly stockpiled acorns in the car.

“Rat had cache of acorns in the blower,” Cotham wrote.

After I had the dead rat removed from my car air-conditioner the noise continued. Rat had cache of acorns in the blower. #Can‘tMakeThisUp pic.twitter.com/xD6Nn1v6uV

In another incident that proves stashing acorns isn’t exclusive to squirrels, repairmen were called to fix an antenna at the Bear Creek Microwave Site in Central California, National Geographic reported.

In this video, watched over 3.5 million times, a staggering stream of acorns tumbles out.

But Walter Koenig, a scientist at the Cornell Laboratory of Ornithology, told National Geographic it was most likely the so-called “acorn woodpecker” (Melanerpes formicivorus) that the big hoarder this time.

Another video, published by Stacy Thrasher in 2012 hits a little closer to home.

In it a man removes siding panels from a house, revealing a surprising cache of acorns.

“While taking the siding off of a house thousands of acorns come out. They removed 10 sheets of siding and each one had this many nuts!” Thrasher wrote under the video.