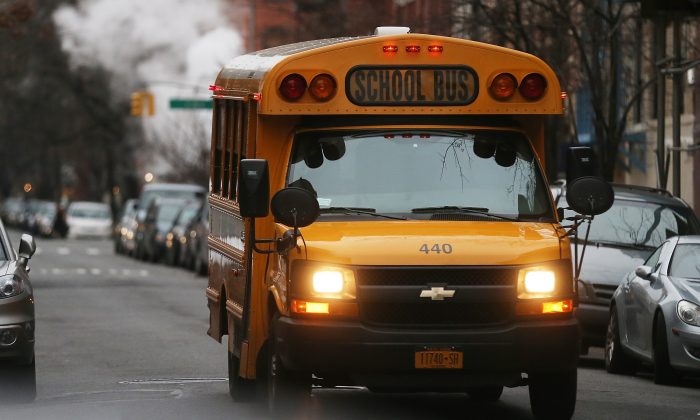 A school bus drives down a street in Manhattan's East Village in New York City on Jan. 15, 2013. (Mario Tama/Getty Images)
Crime and Incidents

A school bus driver transporting 11 children was revived with the overdose drug Narcan after crashing the bus in New Jersey, authorities have said.

Sources told ABC 7 that the incident occurred on the intersection of 14th Avenue and Jones Street in Newark at around 1 p.m., where a 57-year-old female bus driver crashed the bus into a small tree. At the time, 11 students ages 5 to 13 were on board.

A law enforcement source told NBC 4 that the driver had a bag of heroin in her hands.

The bus driver has been identified as Lisa Byrd, according to the news station who cited Newark Public Safety Director Anthony Ambrose.

The children were evaluated by EMS but no injuries were reported. The driver was taken to University Hospital for treatment, according to PIX 11.

A witness to the incident, Sherod Jones, told ABC 7 that he jumped onto the bus to help the driver and children after the crash.

This is the moment a school bus carrying children with special needs crashed in New Jersey. Afterward, the driver was revived with the narcotic overdose drug Narcan: https://t.co/aTAkTNFGZG pic.twitter.com/UGuzE6ZXRL

“I got on the bus and I checked to see what the lady’s foot on the brake, and I put it in park so that the kids would be alright,” Jone said. He described the woman looked as though she was having a stroke.

Sources told PIX 11 that the driver may be facing multiple charges.

This incident comes a day after a multi-car crash in New Jersey, which left three people dead. The driver of the car was apparently under the influence of drugs and was also revived with Narcan, reported ABC 7.

A gas station attendant and a father and son were killed in the crash, while sources say the driver believed responsible was administered Narcan and will survive.

According to reports, the 29-year-old driver, Jason Vanderee, overdosed then lost control of his Honda Pilot before crashing into a Camaro carrying a father and his son, Jon and Luke Warbeck, who were killed in the crash. A third car was also hit and debris from the accident damaged several other cars.

The accident also caused one of the cars to roll over and crash into a Delta gas station. Lovedeep Fatra, 23, who was serving as a gas attendant at the time was killed as a result. Fatra had come to the United States from India just a year ago.

After Vanderee was given Narcan, he was transported to St. Joseph’s Medical Center in Paterson where he is expected to survive, reported ABC 7, citing sources. A state official told the news station that the 29-year-old had his license suspended in early 2017 due to another DWI incident in 2016. His license was reinstated after seven months, meaning that Vanderee was driving on a valid license at the time of the Feb. 19 crash.

In addition, Vanderee had received citations for wrong-way driving on a one-way street in January 2018, the improper display of plates in April 2018, and careless driving in September 2015.

Authorities are still investigating the crash.