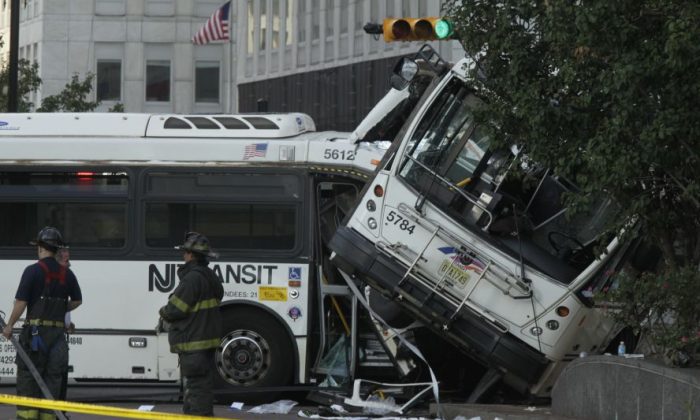 Emergency crews respond to the scene of a accident involving two commuter buses in Newark, N.J., on Friday, Aug. 19, 2016. Investigators are trying to determine if a commuter bus ran a red light and broadsided another commuter bus, killing a driver and injuring several. (Bob Sciarrino/NJ Advance Media via AP)
New York

NEWARK, N.J.—Two commuter buses collided in New Jersey’s largest city Friday morning, pushing one of the vehicles onto its side, killing one of the drivers and critically injuring seven other people, authorities said.

“We’re praying for all of those in the hospital,” he said.

Investigators are trying to determine if the driver who died ran a red light, Baraka said.

Video from news helicopters showed the two tangled buses came to rest on a median. The bus that was struck was on its side, its frame bent and the other bus lodged in its undercarriage. Firefighters could be seen pulling passengers through a side window and loading them onto waiting stretchers and into ambulances.

The crash occurred at Raymond Boulevard and Broad Street as the bus without passengers began its route between Newark and Dunellen; the other bus was traveling between Irvington and Clifton, NJ Transit spokeswoman Nancy Snyder said.

The Essex County prosecutor is investigating the crash.