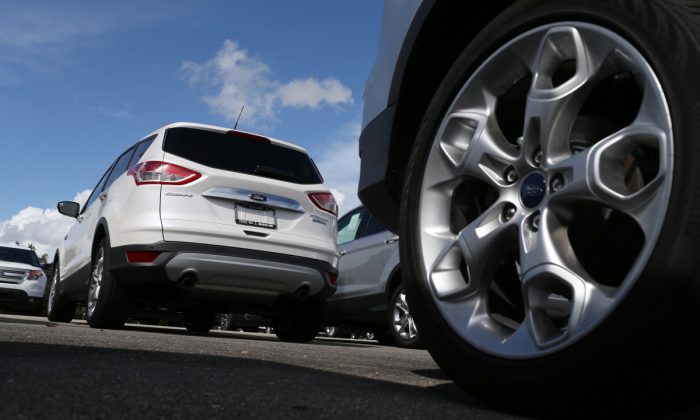 Driver Hits Pedestrian, Backs Up, Only to Run Over Her: Video

Traffic surveillance cameras in mainland China showed a pedestrian being hit by a white SUV as she crossed the street, followed by the driver backing up, then speeding forward to run over her body until the car hit a parked bus.

The incident occurred on the morning of May 5 in Cangxi County, Sichuan Province in China.

The local police reported that the woman, surnamed Cui, 51, survived the incident and has been taken to the hospital, according to the Beijing News. None of the passengers in the bus were harmed.

The driver, surnamed Li, 54, has been detained. Police have opened an investigation.

In China, it’s known that some drivers intentionally run over or attempt to kill a pedestrian after they’ve accidentally hit them. This phenomenon is called “hit-to-kill.”

The video begins showing a woman cross a two-lane city road. She happens to be jay-walking, but not far from a cross walk.

An SUV then comes into view, and hits the woman, knocking her off her feet and onto the pavement. The woman writhes on the ground, and her legs can be seen moving. Another pedestrian walks over to her, and kneels down for just a moment.

At the same time, the car begins backing up. The good samaritan seems to be looking at the driver, and a passenger opens the door, possibly attempting to exit the car at the same time.

The footage cuts to the other woman running out of the way of the SUV, which is now speeding forward, with the passenger door still open.

Then the woman vanishes under the car as it directly runs over her.

In just a second’s time, she is dragged to the end of the crosswalk, and the SUV passes over her. Just a moment later, the SUV slams into the front corner of a bus.

The video shows a witness pointing and explaining, “There was a shoe here, then [the car] rushed forward, dragging the woman to here,” the unidentified man said. “It rushed all the way over there.”

It is unclear from the video if the driver, Li, ran over Cui intentionally. However, there is precedent for Chinese drivers to kill a pedestrian, rather than simply leave them injured and drive away from the scene.

In China, if a driver injures a pedestrian, they will often be ordered by law to cover medical costs until the victim is fully recovered. However, financial compensation for a person killed during a traffic incident is generally lower.

Since there is a bigger payment when an injured person survives a car crash, some Chinese drivers have instead opted to murder the people that they’ve hit with their cars.

This phenomenon in China is known as “hit-to-kill.”

When someone is hit and knocked down, some drivers have been known to run them over again, and not just once in some cases.

Many bystanders in such situations refuse to help the injured individual(s), even after seeing how they’ve been run over.