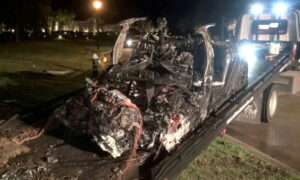 Stock photo of an ambulance in Toronto. (Michael Gil via Wikimedia Commons)
US News

A Georgia boy is dead and another is in critical condition after a driver lost control of his vehicle and slammed into a home on Covington last week, according to the Atlanta Journal-Constitution.

The driver, Karlrio Kelsey, 34, is expected to face charges in the case. He’s accused of losing control of 1997 Dodge Ram on Kirkland Road before he slammed into a garage about 82 feet away from the roadway. The garage had two children inside.

Luke McWilliams and Braden Stevenson, both 12, were searching for a pet hamster in a garage belonging to Braden’s grandmother, AJC reported. That’s when Kelsey’s Dodge Ram slammed into the garage.

Braden Stevenson was on the phone with his dad on Monday when tragedy struck.
His father tells me the story, at 11. ⁦@wsbtv⁩ pic.twitter.com/CH1g1WFtWc

The vehicle ran over Luke and pinned Braden against the wall, the report said.

Braden was rushed to Piedmont Newton Hospital, where he was later pronounced dead. Luke was flown to Children’s Healthcare of Atlanta at Egleston, underwent several surgeries, and is now in critical condition.

“While waiting through his initial surgery, we discovered a car lost control and went through a garage, trapping Luke under a parked van in the garage, and pinning his friend Braden Stevenson between the car and the wall,” reads a GoFundMe for Luke’s family. “After seven hours of surgery, at just 12 years old, he now has a plate from his hip to his knee, pins in both knees, a halo to hold his tibia and femur together, and 41 units worth of blood transfusions due to the significant amount he lost.”

“Braden was on the phone talking about the missing hamster with his father … at the exact moment of impact. The horror of this tragic accident and what Cory heard on the other end of the phone line, as his son instantly became unresponsive, can’t be described in words and is beyond a parents [worst] nightmare,” says a GoFundMe for Braden’s family.

“We know it’s happening even though distracted driving data is hard to come by,” she said of drivers using smartphones while behind the wheel. “Police reports on accidents often don’t report if the driver was distracted and in many accidents, people don’t self-report themselves.”