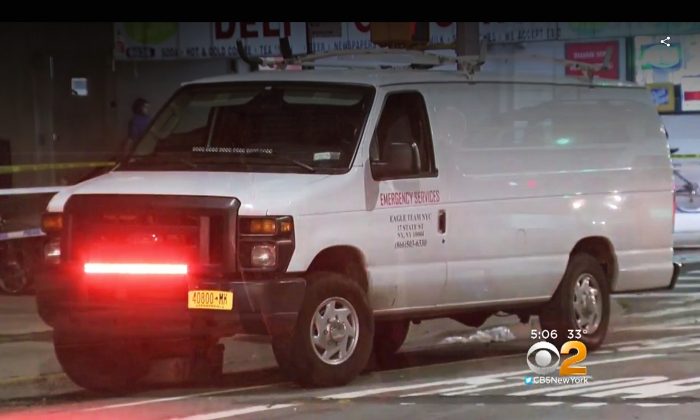 David Cruz allegedly dragged Gavriel Mardaknayevy, 65, two blocks under this van after an argument following a fender-bender in Brooklyn on Nov. 9, 2017. (Screenshot— http://newyork.cbslocal.com)
Crime and Incidents

A man has been charged with murder for running over and dragging another man for two blocks down a Brooklyn street in an apparent case of road rage.

The incident, which happened around 9:30 p.m. on Thursday, Nov. 9, started with a minor scrape in a parking lot and escalated into murder. The victim, a 65-year-old man, was dragged for two blocks by the other driver, a 55-year-old man.

The suspect, David Cruz was driving his white van through the parking lot of a Costco on Second Ave. near 37th St. in Sunset Park, Brooklyn, according to the New York Daily News, when he struck the car driven by the wife of the victim, Gavriel Mardaknayevy.

Mardaknayevy’s wife chased the van, finally catching it in traffic at the intersection of Third Avenue and 67th Street in Bay Ridge.

Mardaknayevy exited his car and approached Cruz, who had also gotten out of his vehicle. The two argued for several seconds. Then Cruz got back into his van.

Mardaknayev stood in front of the van, blocking Cruz from leaving.

Cruz stomped on the gas and drove over Mardaknayev, dragging him for two blocks before coming to a stop at 67th Street and Third Avenue.

“The guy got out of the car and said, ‘you hit me, hold on’ and then the guy just hit him, killed him and dragged him for two blocks,” witness Michael Offman told CBS affiliate WINS.

Offman said he used his own car to cut off Cruz’s escape and held him for police.

“And then I got him out of the car, put his hands up,” Offman said. “And then the cops came within a minute.”

“All you see is the guy under the wheel and the wife is crying,” witness Malook Khaskhali told WINS. “She’s just walking back and forth. Everyone was trying to calm her down.”

Firefighters from the nearby Engine 241 and Ladder 109 lifted the van off the victim.

“The firefighters ran and a bunch of guys started lifting the car up and then they, you know, took the body out,” Khaskhali explained.

“There was a lot of blood. It was crazy. It’s a scene that’s stuck in my head. It’s just blood everywhere,” Khaskhali told the Daily News.

Mardaknayevy was taken to NYU Langone Hospital, where he died.

Cruz, 55, of Brooklyn, was charged with murder Friday night.