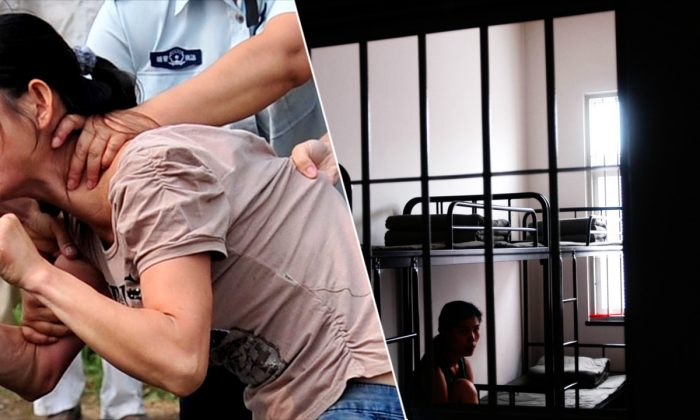 One woman watched her family suffer as she was wrongfully imprisoned for nearly 10 years, tortured to the brink of insanity, and all the while was shadowed by a criminal who wanted nothing more than to see her suffer, simply for her faith, according to a Minghui.org (Chinese) report published on June 6.

Gao Yuxiang, 58, is a believer of Falun Gong and a victim of  the Chinese Communist Party’s (CCP’s) persecution against the peaceful meditation practice. She lives in the northeastern region of China’s Jilin Province.

Also known as Falun Dafa, the spiritual practice that Gao follows teaches believers to be good people by following the principles of Truthfulness, Compassion, and Tolerance. Yet in July 1999, the communist regime launched a brutal persecution in an attempt to eradicate the peaceful practice.

After Gao’s release on Jan. 28, she was able to tell the story of her endurance of inhumane torture. Her story about torture in prison for practicing Falun Gong is just one instance of the numerous crimes against humanity continuing inside China.

Gao began practicing Falun Gong in 1995. Then in 1999, when Chinese media spent entire days dedicated to slandering the practice, Gao went to speak up for her faith in one of China’s most renowned public places: Tiananmen Square.

“When I got there, I was arrested right away, and they locked me up for 15 days,” Gao told Minghui, a website that documents the persecution of Falun Gong in China. Police forced her family to pay for her release. Gao was not deterred.

She returned once more to Tiananmen in October 1999, but the results were much worse. After being detained once more, courts sentenced Gao to a forced labor camp for two years. Guards shocked her with stun guns on a regular basis. While she was locked up, government officials demanded that her family, who lived on a farm, turn over all their grain harvests.

When Gao was released in 2001, she demanded to the government that their livelihood be returned, but was met with dismal and threats of repeated imprisonment. She said she had no choice but to travel to other cities, looking for work, according to Minghui. However, work was never stable, and it caused more problems for her family.

“My 16-year-old daughter was forced to drop out of school,” Gao said, because of financial problems.

Then after eight years of relative peace, plainclothes police knocked at Gao’s door in 2009.

At the time, she was taking care of her frail and ailing mother.

Gao recalled clearly what her dying mother said to her, as police dragged her away from her mother’s hands: “Don’t arrest my daughter, she’s a good person, she’s the best person!”

Police dragged Gao out of her house, while another group of officers ransacked the rooms. The shock was too much for Gao’s mother, as she passed away soon after.

In the detention center, Gao showed her resilience against the wrongful detention. She was locked in a metal chair and interrogated by two officers. “They asked me this and that, but whatever they asked, I didn’t answer,” Gao told Minghui. This enraged the officers.

They then attacked her, beating her unconscious. Gao was awoken by water being dumped on her face. “Until into the night, I still didn’t say anything,” Gao told Minghui.

Then they locked her in a detention center, where she once more opposed the wrongful torture. This time, with a hunger strike. However, the police had another scheme. “They force-fed me, they shoved a pipe down my nose,” Gao told Minghui. “My nose bled, my eyes teared … even now tears often uncontrollably run down my face.”

After almost two years being locked in a detention center, Gao was then forced through a show trial. Her family members were not even contacted. The trial sentenced her to 10 years in prison in 2011.

In July 2011, Gao’s horrific torture in the Changchun Women Prison began. Instead of just being incarcerated like the other prisoners, she became the target of abuse and violence—this was done to force her to renounce her faith.

“They punished me by making me sit on a small plastic stool, I had to have perfect posture, sitting upright, with my hands on my knees,” Gao told Minghui. “If I moved at all, they would hit me and ridicule me.”

She recalled that about 20 female prisoners were organized to surround her, and demanded she abandon her beliefs. Under that intense pressure, Gao just told them the truth about her faith and wrongful treatment.

When guards realized that the conversion failed, the prison took a different approach. A woman named Pang Shuyan, who had shown good behavior during re-education through forced labor, was assigned to stay at Gao’s side day and night, reporting on all behavior.

Gao had not escaped the punishment of sitting on a plastic stool. Now, Pang was given the authority to make Gao sit on the stool from 4 a.m. all the way until 10 p.m.

After five to six days of sitting, Gao said that the prisoners watching her had the idea to put a photo of Falun Gong’s founder, Li Hongzhi, on her stool, and demand she sit on it. Out of respect, Gao refused, even when they tried to force her down onto the stool.

When Pang saw the resistance, she dragged Gao to the bathroom. “She flew into a rage, slapping my face, mouth, and since I wouldn’t sit, they punished me with standing,” Gao told Minghui.

Gao was forced to stand for the same amount of time as she had sat, sometimes even longer. “After about 20 days, varicose veins were showing on my legs, swelling up clear and thick,” Gao told Minghui.

“[My legs] were like an elephant’s, blood would even drip out of them.”

The punishment then was made even worse.

Gao was ordered to continue standing for 24 hours at a time. “I stood for five days and five nights, they didn’t let me sleep,” Gao told Minghui. Then Pang unfurled another scheme. She took the picture, which Gao refused to sit upon, and demanded that the other prisoners stick it to Gao’s bare backside.

Then Gao’s restraint snapped, and in a fury yelled and shoved the women away from her as they attempted their plan.

Pang then forced Gao into a new kind of suffering. Believers of Falun Gong practice a siting meditation, where both legs are folded on top of each other. In yoga, this is called the “double lotus.” Pang made Gao sit in the double lotus for 12 hours. Gao further had to hold her arms above her head.

This was all on top of almost a whole month of the standing torture and a week of sleep deprivation. The pain and suffering still did not break Gao.

Pushed to the Final Limits

Pang, along with six or seven other individuals charged with crimes like murder, were assigned to watch Gao and the other imprisoned practitioners. The faithful were then deprived of their basic sanitary needs.

Gao was not allowed to use the restroom, and after days of holding back, she finally could endure no longer. The group of prisoners mocked her like school children: “‘Gao Yuxiang is so old and wets her pants, she has no shame.’ They insulted me, I bawled, and felt so ashamed,” Gao told Minghui.

To make matters worse, the wrongfully imprisoned women were forced to eat off the floor. Gao was not allowed to use the restroom again, and did not want to cause the floor to be soiled even further. In a muddleheaded moment, she agreed to the criminal’s punishment: Insult the founder of Falun Gong in writing.

“After they let me go to the bathroom and I was more clear headed, my heart felt deep and painful regret,” Gao told Minghui.

Some time later, Pang put Gao through a new form of torture. She made Gao kneel on the bed, laying forward, with her feet raised to her buttocks and hands holding her ankles. Gao had to sit this way for 12 hours a day without moving. Any resistance, and Pang would beat her head with a rolling pin.

After 49 days of this daily punishment, Gao was sent to the prison infirmary, finding the extent to which her body was damaged. “[They] couldn’t even draw blood during the check-up,” Gao told Minghui.

The Edge of Insanity

“I even forgot my grandson’s name.”

The prisoners ridiculed Gao with laughter. “I was laughing too, but this laugh was extraordinarily abnormal,” Gao told Minghui. Others even thought that she had snapped.

But then Gao began reciting words of teaching from her faith, and gradually she came back to herself.

Gao witnessed other women break under the same brutal treatment that she received. Other women who refused to sit on the plastic stools were beaten to the point of losing control of themselves.

Even then, the prisoners still mocked and jeered at the persecuted women.

Others were barely given enough food or water to survive. Some had to secretly drink water from flushing toilets.

By 2016, Gao had to do forced labor in the prison, and she did not suffer the same forms of torture as before.

Then on Jan. 28 this year, Gao was released from the prison, finally able to tell her story of brutal and wrongful persecution that she endured all those years.