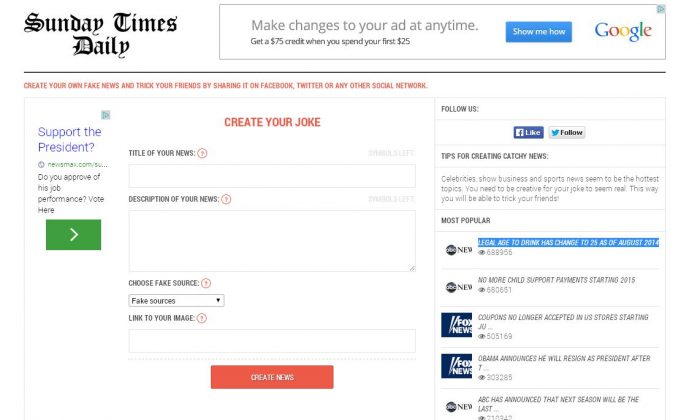 An article saying the drinking legal age has to change to 25 instead of 21 isn’t real.

It was posted to the Sunday Times Daily, a fake news creator website. On Facebook, the fake story appears to come from ABC News, but it’s not real in the least.

At the top of the Sunday Times Daily page, it says: “Create your own fake news and trick your friends by sharing it on Facebook, Twitter, or any other social network.”

It adds: “Celebrities, show business and sports news seem to be the hottest topics. You need to be creative for your joke to seem real. This way you will be able to trick your friends!”

The post says it had nearly 2 million pageviews. When one clicks on the post, it says, “Don’t worry, you are not the only one. [More than 1 million] people already fell for this. If you liked the joke, you can share it and trick your friends. Also you can create a joke of your own clicking the button below!”

On Twitter, it appears that a large number of people were fooled by the fake story.

“Heard they was changing the legal drinking age to 25,” one person wrote on Tuesday.

“The legal drinking age will be changed to 25 as of August 2014? Excuse me what,” wrote another.

“Bruh if they change the drinking age to 25, ima be highly pissed,” added another.

Wrote another, “The drinking age is being changed to 25 instead of 21.”

No mainstream news outlets have covered anything about the drinking age being changed.

Recently, the fake news site posted an article saying Walmart will stop accepting EBT cards, and it posted another claiming that child support payments will stop after 2015.

“Many readers had previously been fooled by similar pranks posted on the same site involving the supposed ending of coupon redemption in the U.S.,” says hoax-debuking website Snopes.com about the Sunday Times Daily. “Viewing the article on the Sunday Times Daily site for more than a few seconds produces a message revealing that it’s all just a joke,” the site adds.