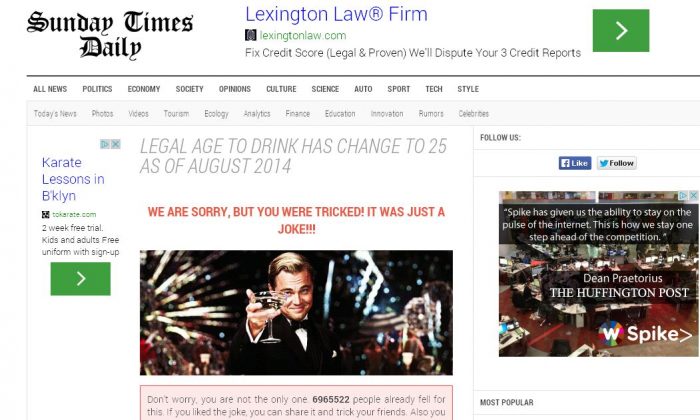 A post that says the US drinking age will be changed to 25 in August 2014 isn’t real in the least.
Social Media

A post that says the US drinking age will be changed to 25 in August 2014 isn’t real in the least.

The fake article from the Sunday Times Daily was being shared on Facebook and Twitter this week.

It also says: “Celebrities, show business and sports news seem to be the hottest topics. You need to be creative for your joke to seem real. This way you will be able to trick your friends!”

After one clicks the post, it says: “Don’t worry, you are not the only one. [More than 1 million] people already fell for this. If you liked the joke, you can share it and trick your friends. Also you can create a joke of your own clicking the button below!”

On Twitter, a number of people shared the fake story and were wondering if it is real.

The Sunday Times Daily also has other fake posts including “NO MORE CHILD SUPPORT PAYMENTS STARTING 2015” and “COUPONS NO LONGER ACCEPTED IN US STORES STARTING JULY 1.”

There’s no country in the world that has a drinking age minimum of 25. Most countries vary between 16 and 21.

“The National Minimum Drinking Age Act of 1984 required all states to raise their minimum purchase and public possession of alcohol age to 21. States that did not comply faced a reduction in highway funds under the Federal Highway Aid Act…. It does not prohibit persons under 21 (also called youth or minors) from drinking,” says the State University of New York’s website.