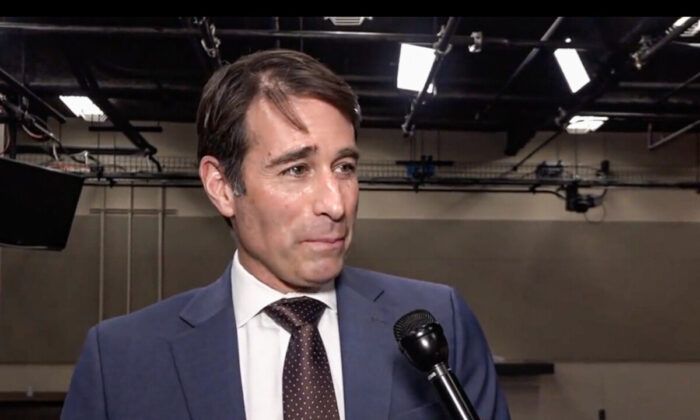 Rep. Garret Graves in an interview with NTD's "Capitol Report" on Mar. 8, 2022. (NTD/Screenshot via The Epoch Times)
Executive Branch

The Biden administration lacks an understanding of how the energy industry works, and its recent statement regarding 9,000 approved drilling permits reflects as such, said Rep. Garret Graves (R-La.).

According to White House press secretary Jen Psaki in a March 7 press briefing, it’s inaccurate to say the Biden administration is not allowing companies to drill. She said, “There are 9,000 approved drilling permits that are not being used,” and she suggested reporters “ask the oil companies why they’re not using those.”

“That statement represents just a lack of understanding of energy policy and energy resources in the United States,” Graves told NTD’s “Capitol Report” on March 8. “You may get something permitted. It still may take ten years to actually get it into production. So a permit doesn’t necessarily mean that it can be turned on tomorrow.

“Number two, you have things that are permitted that ultimately are dry holes. They don’t actually have oil or gas. … It’s not a viable well. You may have something that’s permitted, but it may not have economically recoverable resources.”

Graves represents the sixth Congressional district of Louisiana, a major energy-producing state. He serves on the House Committee on Natural Resources and is the ranking member for two other House committees.

Biden has paused construction of the Keystone XL pipeline since he took office. He also placed a moratorium on leasing federal lands to oil and natural gas producers.

“So this is a flawed energy strategy coming out of this administration,” said Graves. “And they have put us in this just really awful situation that we’re in right now.”

Currently, gas prices have reached the highest in American history.

According to automobile association AAA, the average national price for a gallon of regular gasoline touched $4.17 on March 8, the highest price ever, not accounting for inflation. The previous high was $4.11 on July 17, 2008. On March 9, the price continued to rise to $4.25.

In an attempt to contain the price surge, on March 1, Biden authorized the Department of Energy to release 30 million barrels of oil from the U.S. strategic petroleum reserves, despite Americans consuming an average of 20 million barrels a day.

The administration sent a delegation to Venezuela on March 5, seeking oil resources from the socialist President Nicolas Maduro.

Graves said the solution is to develop a longer-term strategy, which is to produce more American energy.

Graves explained that countries like Russia, Venezuela, and many African nations that we’re dependent on lack environmental rules.

Psaki claimed on March 7 that the United States produced more oil in President Joe Biden’s first year than in former President Donald Trump’s first year. And according to the Department of Energy, in 2023, “we will produce more oil than ever before.”

On March 8, Biden suggested that the oil prices “are going to go up.”

“Can’t do much right now. Russia is responsible,” said Biden.