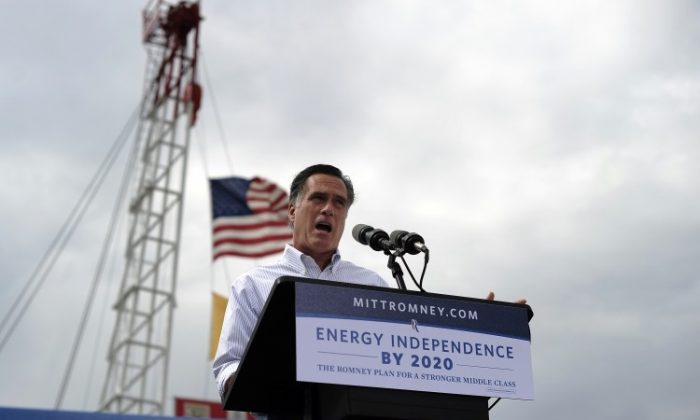 Romney spoke of North American energy independence, including Mexico and Canada in his plans. He said during his announcement in New Mexico that partnerships with Mexico and Canada would allow America to meet its energy needs, “so we don’t have to buy from the Middle East or Venezuela, or anywhere else we don’t want to.”

He called for the controversial Keystone Pipeline from Canada to the Gulf of Mexico to be built.

Romney proposed to “Establish a new five-year offshore leasing plan that aggressively opens new areas for development beginning with those off the coast of Virginia and the Carolinas,” with production quotas for each five-year lease and to “implement state-of-the-art safety procedures.”

He did not mention California, which is expected to resist the idea of expanded offshore drilling.

After the devastating BP oil spill in the Gulf of Mexico in 2010, new drilling was blocked or delayed, causing economic distress in the already distressed region.

Romney more drilling. He said in his announcement, “we should stop using these legal suits to stop production of oil.”

He called for state oversight of energy resources on federal lands.

Additionally, Romney’s plan would not require older coal plants to retrofit to reduce emissions and would expand nuclear plants. Romney stated that the government should not invest in alternative energy, “because the government makes a poor venture capitalist.”

In a statement responding to Romney’s proposal, Sierra Club Executive Director Michael Brune said, “Mitt Romney has devised an energy insecurity plan that would make us even more dependent upon oil, coal, and gas companies, while ignoring climate disruption, economic growth, and the health and well-being of the American people.”

According to Brune, America is already using new energy sources and new technologies successfully. Greenhouse gas emissions are at their lowest levels in 20 years, oil consumption is down, and “new vehicle standards will double efficiency and slash carbon pollution,” said Brune.

In addition, wind power has doubled and solar power has grown by a factor of five, according to Brune. “We can’t afford to turn back,” he said.