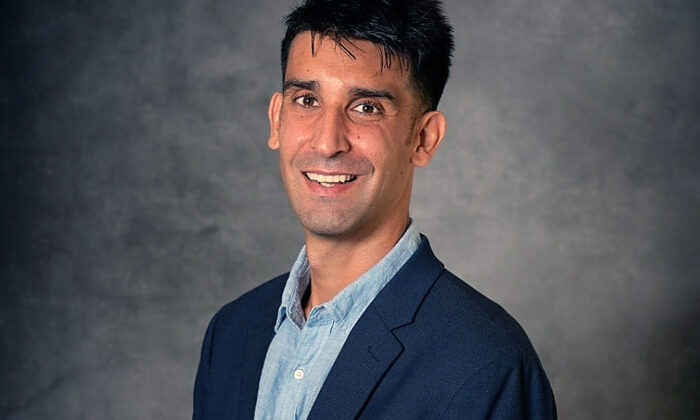 A year under a cloud of federal charges for his 20-minute walk through the U.S. Capitol led Matthew L. Perna to take his life on Feb. 25, 2022. (Courtesy Perna Family)
US Features

From a mission to Haiti, to teaching English in South Korea and Thailand, 'he wanted to change the world'
By Joseph M. Hanneman

He traveled to Asia, Europe, and South America. He went on a mission trip to Haiti. He returned home to Pennsylvania to make that world a better place.

It wasn’t the treads-on-asphalt kind of running that he preferred, but the back-to-nature kind—trail running. His strides took him through beautiful terrain, some of it reflected in his nature photography. It was exercise with a view. He was good at it, as indicated by the map on his wall with medals hanging from it.

Many of the states had no medals hanging from them. Perna’s goal was to have one medal from each state. But there will be no more running medals for him.

On Feb. 25 at his home in Sharon, Pennsylvania, he hanged himself in his garage. He will be buried this week, just shy of his 38th birthday.

A year of dealing with four criminal charges lodged against him for his 20-minute walk through the U.S. Capitol on Jan. 6, 2021, had worn him down.

“The constant dragging on of this, all he wanted to know was what the outcome was going to be,” Geri Perna, Matt’s aunt, told The Epoch Times. “And they kept changing the game. It wore on him. I don’t care what anybody says—that was the goal.”

Matt Perna walked into the Capitol at 2:47 p.m. on Jan. 6, 2021. He broke nothing that day. He didn’t toss objects at the police, get doused with pepper spray, attempt to enter any private offices, or access the House or Senate chambers.

Prosecutors said he later tapped on a window with a metal pole, but there was no indication of damage. He posted a video to Facebook that said the purpose of Jan. 6 was to show that then-Vice President Mike Pence was “a traitor.”

“He just wanted it over, even though we did not believe he was guilty of anything,” Geri Perna said. “His attorney advised him pleading guilty would be the easiest and quickest way to end all of this. Because he knew this was weighing so heavily on Matthew.”

The obstruction of an official proceeding charge referred to the counting of Electoral College votes by Congress, which was delayed by some six hours by the unrest at the Capitol.

Congress had adjourned nearly 30 minutes before Matt Perna set foot in the Capitol, and Pence had departed the building just before 2 p.m., according to court records. Vice President-elect Kamala Harris left the grounds before noon, despite claims in many Jan. 6 charging documents that she was at the Capitol during the unrest.

Worried About Years in Prison

Perna’s sentencing was originally scheduled for March 3, the seventh anniversary of his mother Roni’s death. She was 59.

That was a role reversal for Matt, since he was usually the one encouraging others, his aunt said.

In a motion filed last month, prosecutor Nihar R. Mohanty said the U.S. Department of Justice needed more time to review the case and make sure “similarly situated January 6 defendants are treated in the same manner.”

Mohanty said the government needed time to “file objections to the pre-sentence report” and develop its sentencing recommendations. The motion didn’t say what the objections were. Sentencing was moved to April 1.

Matt Perna’s attorney called him with the news. It was just too much for him.

“When that phone call came, he had not one ounce of hope left,” Geri Perna said. “None.

The fear of an extended prison term for such benign behavior was eating him up.

“He was amazing, and the world has lost that amazing soul. He may have killed himself, theoretically. But they got to him first,” she said.

Geri wrote Matt’s obituary, which has been shared across the globe from the funeral home’s website, on the flight to Pennsylvania from Florida. People from Australia, Ireland, and Antarctica left consoling messages.

“His community (which he loved), his country, and the justice system killed his spirit and his zest for life,” the obituary reads.

“He didn’t break, touch, or steal anything. He did not harm anyone, as he stayed within the velvet ropes taking pictures. For this act, he has been persecuted by many members of his community, friends, relatives, and people who had never met him.”

Geri Perna said she wanted the obituary to leave no unanswered questions about why her nephew wouldn’t see his 38th birthday. Most of the reaction has been comforting.

Some people have asked her why Matt pleaded guilty, or told her that he should have fought the charges more. Those people don’t know the agony he experienced, she said.

“I’m getting angry. I’m not angry at Matthew. I am proud of my nephew. We are all proud of him,” she said. “We are just heartbroken that they did what they did.

“It’s not about him not being strong enough to handle it. That is not the case.

“It was the relentless pursuit of him. As a human being, he couldn’t take any more. They are ruining lives.”

Matt Perna was a proponent of holistic health. He was a representative for HempWorx, which sells CBD oil products made from hemp grown in Kentucky. After being charged, he was required to stay off social media, and his websites were taken down.

“So the first thing they do is they go after your livelihood,” his aunt said.

Perna lived in South Korea and Thailand, teaching English to schoolchildren. He posted a photo on his Flickr photo gallery of a snow-covered forest trail in Halla-san National Park on Jeju Island. His photos from Thailand and other locales look like they belong in a travel brochure.

He was a voracious reader. While he loved to read books with substance, he loved learning about people even more. He and his brother made a trip to Machu Picchu in Peru. During their stay, they ended up playing soccer with a group of schoolchildren.

“In all these pictures, these little kids, little boys running around playing soccer with Matt, who was over six feet tall,” Geri Perna said. “Just a big guy with a huge heart. He wanted to change the world.”

He also made a mission trip to Haiti, the island nation in the Caribbean Sea ravaged by hurricanes.

“He was very humbled by the poverty there,” his aunt said. “And material things didn’t matter to Matt.”

So why would someone so well-traveled return to a small former steel town in Pennsylvania? The answer says a lot about Matt Perna as a man.

“His mother had died seven years ago. He came back here when she died,” Geri Perna said. “He didn’t want to leave his dad by himself. He didn’t want him to be alone. So he concentrated his efforts and his business in this area.

“It’s because he loved his dad, and didn’t want him to be alone since he lost his wife.”

“I hope that Matthew Perna’s name, I hope everybody in every household in the United States speaks that name at least one time,” she said.

Matt’s father, Larry Perna, was unsure sure about all of the publicity the case was receiving, she said. She reassured him.

“I said, ‘This is what Matt was trying to do, change the world and make the world awake. They’re definitely awake today.’”