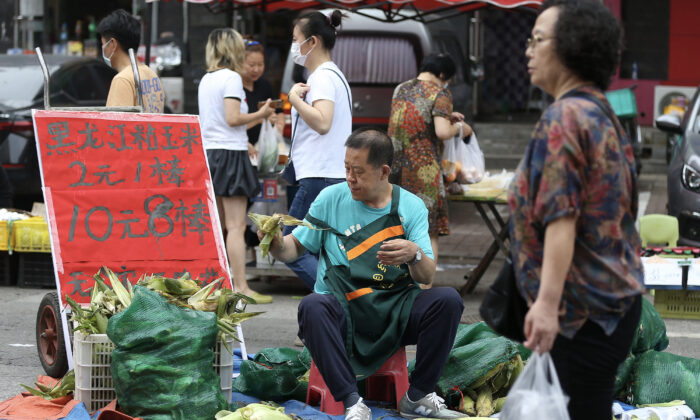 A corn vendor waiting for customers at a market in Shenyang in China's northeastern Liaoning Province, on July 9, 2022. (STR/AFP via Getty Images)
Thinking About China

China’s GDP likely shrank in the second quarter, contrary to official reports, as the country is seen making attempts on several fronts to desperately boost its ravaged economy.

Beijing announced a 0.4 percent expansion in China’s GDP during the second quarter. It was the second weakest quarterly growth ever officially recorded.

But private data paint an even worse picture. Impacts from COVID-related lockdowns in more than a dozen cities across China, sagging consumer spending, and lower demand for goods from foreign countries all suggest a contraction. It would be the first quarterly contraction since 2020 at the onset of the virus pandemic.

Travel patterns show that China’s roads were generally less busy in the first half of 2022 than the prior year. Domestic Chinese flight activity was also down more than 60 percent. There was also less movement of goods between cities than the prior year, in terms of trucking activity.

The China Beige Book, which provides alternative economic indicators for China, said Chinese businesses it surveyed indicated weaker activity and demand from customers due to ongoing lockdowns in Q2.

So all the signs point to a very weak economy.

Of course, Beijing never would have reported a quarterly GDP contraction. It would have been very bad for optics and morale. China has insisted that it would meet the 5.5 percent annual GDP growth in 2022, a figure that is nearly impossible to achieve given the Q2 GDP print. Nonetheless, Premier Li Keqiang has been on a national tour over the last few months imploring regional and local governments to work to expand economic growth.

This is a critical year for Beijing and the CCP. CCP general secretary and China’s de facto leader Xi Jinping is expected to be granted another term at the helm of the Party at the 20th National Congress this fall. There has been a public outpouring of praise for Xi and his policies in recent weeks across Chinese state media. The country’s “dynamic COVID Zero” policy, which Xi has been a champion of, requires tough restrictions wherever new virus cases emerge. And Beijing has maintained that it will continue with this policy while managing the nation’s economic growth.

What are some ways to manage growth despite lockdown challenges and deflating consumer spending?

The tried-and-true playbook of selling more debt, of course.

Chinese local governments issued a record 1.94 trillion yuan ($290 billion) of bonds in June, a year-over-year increase of more than 140 percent, according to data from Great Wall Securities. China has been issuing debt above the planned pace. More than 93 percent of the 3.65 trillion local government special purpose bond quota for the entire year had been issued in just the first six months of the year, Great Wall found.

The majority of such debts will go toward infrastructure, which would have the dual purpose of providing temporary employment and generating ongoing revenue for the government. It would go a long way to offset lost revenues from pandemic lockdowns, COVID-related tax rebates, and depressed real estate land sales.

With the 2022 quota almost full, Beijing is considering allowing local governments to issue even more debt by tapping into next year’s planned quota. Bloomberg reported that the Ministry of Finance is assessing allowing the sale of up to 1.5 trillion yuan ($220 billion) of special bonds in the second half of 2022.

It would be the first time such bond issuances were brought forward so early. This suggests that China’s economy is in even worse shape than originally thought, and Beijing is desperate to fill the growth gap.

China’s centrally planned economy allows for a certain amount of debt to be issued each year in support of that year’s revenue budget. Historically, local governments didn’t start selling new bonds until March of each year at the National People’s Congress. Then by 2019 Beijing began allowing bond issuances starting Jan. 1. Any adjustment to this timeline would require the approval of the State Council, China’s cabinet.

But the same old playbook may no longer work. China could turn increasingly more desperate as social unrest—the Party’s kryptonite—disrupts the CCP’s control over the economy.

By July there were reports of homebuyers refusing to pay their mortgages on newly developed homes that the debt-laden property developers could not afford to finish. This phenomenon has spread to around 100 cities across China. And frustrated consumers have been protesting in several cities. One video that went viral in July caught protestors being beaten up by government-paid goons.

Real estate development is one sector that Beijing has struggled to manage, with many of the top developers in dire financial straits.

To manage consumer morale, China also announced it would begin offering consumers “consumption vouchers” for dining out. Through municipal governments, the CCP will hand out a number of vouchers that can be spent at restaurants and other establishments.