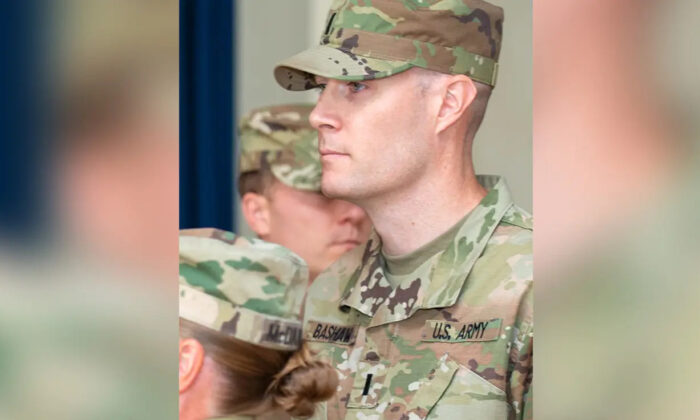 A medical Army officer who discovered a sudden increase in disease coinciding with reports of side effects alongside COVID-19 vaccines—which the Army has dismissed as a data glitch—said he faces involuntary separation after being convicted but not punished for disobeying COVID-19 protocol.

In January 2022, First Lt. Mark Bashaw, a preventive medicine officer at the Army, started noticing some “alarming signals” within the defense epidemiological database.

The Defense Medical Epidemiology Database (DMED), which tracks disease and injuries of 1.3 million active component service members, showed during the pandemic a significant increase in reports of cancers, myocarditis, and pericarditis; as well as some other diseases like male infertility, tumors, a lung disease caused by blood clots, and HIV, Bashaw said.

Several of these illnesses are listed in FDA documentation as potential adverse reactions associated with COVID-19 vaccines, Bashaw told EpochTV’s “Crossroads” program in an interview on Aug. 1.

Seeing increases in cases of these illnesses as high as 50 percent or 100 percent in some situations, Bashaw stepped forward as a whistleblower to raise concerns about his findings.

Bashaw’s whistleblower declaration, submitted to Sen. Ron Johnson (R-Wis.) who is facilitating the sharing of information from early investigations of COVID-19 products with Congress, said he saw the increasing incidence of these disorders observed in DMED as “very troubling.”

Specifically, the number of cancer cases among active service members in 2021 nearly tripled in comparison with the average number of cancer instances per year from 2016 to 2020, Bashaw said in his declaration.

Bashaw’s responsibilities as a preventive medicine officer, with a specialty in entomology, include “participating in fact-finding inquiries and investigations to determine potential public health risk to DoD [Department of Defense] personnel from diseases caused by insects and other non-battle related injuries.”

A week after this information was brought out in January in a “COVID-19: Second Opinion” roundtable organized by Johnson, the data in DMED changed, Bashaw said, and all of these troubling spikes in diseases and injuries “seemed to have disappeared and been realigned with previous years.”

Curiously, the glitch didn’t affect the data from 2021, which remained the same. Instead, the corrected data saw the data for prior years increased, which made the 2021 data look normal and in line with the running average, Bashaw explained.

In response to the whistleblower claims, Maj. Charlie Dietz, a spokesperson for the DoD, told The Epoch Times that the data in DMED “was incorrect for the years 2016-2020,” so the system was taken offline to correct the root cause of the data corruption, which didn’t impact data from 2021.

After the roundtable, Johnson sent three letters to the Department of Defense (DoD) requesting an explanation of the sudden increase in medical diagnosis and the changes in the DMED data.

“The concern is that these increases may be related to the COVID-19 vaccines that our servicemen and women have been mandated to take,” Johnson said in one of his letters.

The senator also sent a letter to the technology company that manages DMED asking for clarification of all data integrity issues uncovered in the database.

Although Johnson received some responses from the tech company, there has not been still a “solid, rational explanation” as to why a glitch occurred in the database and what it was, Bashaw said.

After the glitch, Bashaw pulled out data from the Vaccine Adverse Event Reporting System (VAERS) for injuries related to viral vaccines to compare to his findings on DMED. He compared the average of the last 24 years to data for 2021 and found an eleven-fold increase in the number of suspected adverse incidents reported in 2021.

“I compared it to the average of the last 24 years, it’s a 1,100 percent increase in 2021. And the only difference we had in 2021 was the rollout of these experimental emergency use authorized COVID-19 vaccines,” Bashaw said.

VAERS is managed by agencies of the Department of Health and Human Services (HHS) and serves as “a national early warning system to detect possible safety problems in U.S.-licensed vaccines,” according to HHS’s website.

Bashaw tried to raise his concerns regarding COVID-19 vaccines to his leadership at the army through the proper channels, recommending that it change its risk communication strategy for the vaccine from ”safe and effective “ to “there might be some problems.”

However, his concerns were not addressed, Bashaw said. “And then, later, I was targeted due to my own [COVID-19] vaccination status.”

Bashaw said he was “forced into an experimental emergency use authorized testing protocol, which was only for the unvaccinated.”

He questioned the policy, saying that forcing unvaccinated individuals into such a testing regimen seems “coercive” and “kind of punitive.”

Bashaw invoked the provisions of the United States Code, which gives liability protection for epidemic products authorized for emergency use to manufacturers and distributors of the product, the government, and medical personnel who administer the product.

However, the perspective of the individual who chooses to use these products or to whom the product is administered is not considered by this law despite their taking on all the burden of risk. “For this reason, [they should have] the ability to accept or refuse these products,” Bashaw said.

“It’s my job as a medical officer in general, to warn individuals, or at least try to communicate [to them] what they might be getting themselves into with these products.”

Bashaw pointed out that the individual’s right to accept or refuse administration of these products and to informed consent has also been written down in the United States Code, specifically 21 U.S. Code § 360bbb–3.

Individuals to whom the product is authorized for emergency use should be informed “of the significant known and potential benefits and risks of such use, and of the extent to which such benefits and risks are unknown,” the said law stipulates.

This applies not only to the experimental vaccines but also to COVID-19 testing procedures and the wearing of masks, Bashaw said.

Bashaw has been court-martialed for disobeying the mandated COVID-19 protocol. He challenged the accusation saying that the order to follow the protocol disregarded the individual’s right to informed consent guaranteed by U.S. law.

The court convicted Bashaw, but the judge did not hand down any punishment and recommended to the commanding general to drop the conviction, Bashaw said, but the general upheld the conviction.

After the conviction, the Army initiated Bashaw’s involuntary separation from service after 17 years of honorable service. His expected promotion to captain was also withheld, the officer said.

The justification for his discharge was that the army lost trust in his “capabilities as an officer over the past seven months,” Bashaw explained.

Bashaw filed a rebuttal, hoping to reverse its course.

In addition, Bashaw filed a whistleblower complaint at DoD, but the decision was made that there was no retaliation against him, and the case was closed out. He said that he then filed another complaint which exercises his right guaranteed by the code of military justice to challenge such decisions.

The Epoch Times reached out to the Army Public Health Center and the Department of Defense for comment.

Recently, Bashaw has petitioned the Judge Advocate General of the Army, asking the general to review what he has brought forth in official documentation.

This is concrete evidence, and it is well founded on the law to protect service members and individuals in general, Bashaw said. “I wouldn’t be risking 17 years of my service [and] the health and welfare of my family on some flimsy argument.”

Bashaw said that he is concerned with the integrity of the data that the leadership is basing their strategic decisions upon. If data is being manipulated in some way, or if there is a data glitch, then these senior-level leaders make decisions “based on something that might not be the case,” he explained. It is especially “a serious sign of concern” if a private contractor manages the medical information of service members and has glitches with it.

“And so it’s super important to have solid data and trustworthy sources.”

Bashaw said he decided to bring his concerns to his leaders’ awareness to honor the oath he took to uphold the Constitution of the United States and to glorify God.

“I will absolutely do everything in my power to warn my brothers and sisters in uniform. And that’s my job as a medical officer, to communicate risks and potential harms,” Bashaw said. “That’s my duty.”