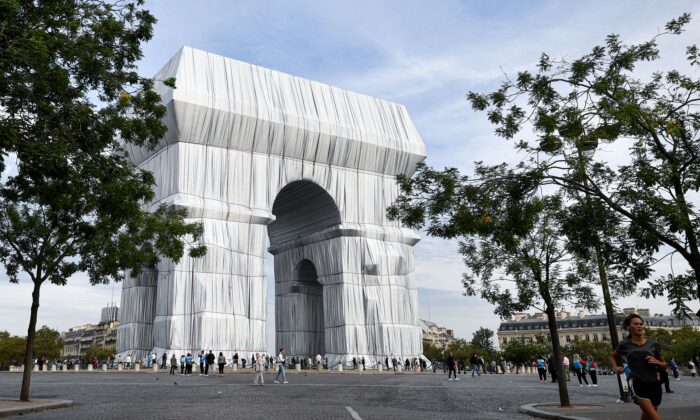 Bystanders walk near the Arc de Triomphe, wrapped in silver-blue fabric, as it was designed by late artist Christo, in Paris as part of the 38th European Heritage Days and the launch of the Cultural Olympiad in Paris, on Sept. 19, 2021. (Alain Jocard/AFP via Getty Images)
Viewpoints

For example, the Arc de Triomphe in Paris, one of the city’s great landmarks, has just been draped or wrapped in 25,000 square metres of polypropylene fabric, tied with red rope, for a few days, in accordance with the wishes, or ambitions, of the now-deceased “artists,” Christo Vladimirov Javacheff (Christo, as he was known) and his wife, Jeanne-Claude Denat de Guillebon.

This power couple succeeded during their lives in persuading authorities in many places to allow them to drape prominent buildings—for example, the Reichstag in Berlin—in similar fashion. Unfortunately, the polypropylene fabric they used to drape the Arc de Triomphe is recyclable, so that it could in theory be re-used to cover the Taj Mahal, say, or the Jefferson Memorial.

To ask whether draping famous buildings and monuments in fabric is really art is to ask the wrong question, although I daresay that most people, if asked, would reply in the negative. You might as well ask how you distinguish true from false witches or whether unicorns prefer cold weather.

The right question to ask is whether such drapery (placed at great expense and effort, be it remembered) contributes anything to the beauty or understanding of the world. Again, I have little doubt of most people’s response.

I was much struck, however, by the commentary by the artistic intelligentsia on the whole proceeding. A representative article was titled “Why l’Arc de Triomphe wrapped is the most important artistic statement of the 2020s.” The title alone gives some insight into the fathomless superficiality of the contemporary art world, at least that part which reaches, or sinks to, the level of publicity.

The term most important artistic statement is revealing in itself. It is clear that the author intends the words most important to indicate his approval, without apparently realizing that something can be the most important of its type and yet be utterly despicable. Pol Pot was by far the most important Cambodian leader of the 20th century, but his undoubted superior importance does not redound to his credit.

As for artistic statement: is it the function of art to make statements, and if it is, why bother with the art and not just make the statement? It would be far quicker, more effective and economical simply to do so.

Of course, art can give rise to or suggest reflections that are expressible in propositions. In fact, the greatest art is inexhaustible in this respect, but art is not reducible to propositions about it or that it provokes.

Why should draping the Arc de Triomphe in polypropylene be important? Nowhere does the author suggest that the result is beautiful or even merely pleasing to the eye.

He expresses no opinion on this matter, beauty (oddly enough) being of no concern to present-day artistic intellectuals.

He does not consider the possibility that, if draping the Arc de Triomphe in polypropylene is deemed artistically important, this could only be as a consequence of the extreme triviality of all other contemporary artistic endeavour.

In short, if the work of Christo is important by comparison with other work, art is dead, at least in the West.

The author of the article explains that the idea of covering the Arc de Triomphe with fabric first occurred to the artists sixty years ago, and that this was the posthumous fulfilment of their dream, the acme of their career as it were.

But then the question arises as to the point of covering the Arc de Triomphe. What does it mean?

The author quotes from an interview that Christo gave shortly before his death: “The work must be seen as the expression of total irrational freedom, free from any justification. I decided to do something completely unnecessary, a bit like a painter in his studio with a blank canvas. Nobody asks him why he puts blue, black or red on his canvas. He does it by instinct.”

This is fairly typical of the gaseous, egotistical nonsense that modern artists are apt to exhale when asked to talk about their work which seems to others, prima facie, devoid of value.

Even if it were true (which it is certainly not in most cases) that painters put blue, black or red paint on his canvas in a purely arbitrary fashion and in a spirit of irrational freedom, there is a difference between doing so and draping a huge public monument in polypropylene and red rope. The latter is an imposition on the public; the former is not.

Moreover, if taken seriously, what Christo said would be utterly destructive of all possible artistic judgment. If, for example, he had decided to cover the Arc de Triomphe in chocolate, or in pink paint, it would have been neither better nor worse than, merely different from, covering it with polypropylene, for to have done either of those things (or indeed any of an infinite number of things) would likewise to have been the “expression of total irrational freedom,” with no criterion of judgment to decide between them.

Christo’s egotism shines through his words. His view is endorsed by the writer of the article, as it is by the majority of the commentary by art critics that I have read.

And in this uncritical endorsement of artistic freedom as irrational freedom, with no possible criteria enabling us to prefer one thing to another, we see an explanation of why architects of the 20th century have been so easily able to impose their ugliness upon the world.

Like Christo, they make no distinction between freedom to create in the public and in the private space. For them, any limitation of their irrational freedom is an attack on creativity itself, so the public has a duty to put up with whatever they do.

The article says with unintended irony and supreme historical inaccuracy: “And so it’s heartening that in France, the founding nation of liberté, we see one of the biggest tributes to creative freedom erected in the heart of its capital.”

Among the first fruits of liberté was the Terror and the mass murder in the Vendée. At least these days it gives rise only to strenuous triviality.