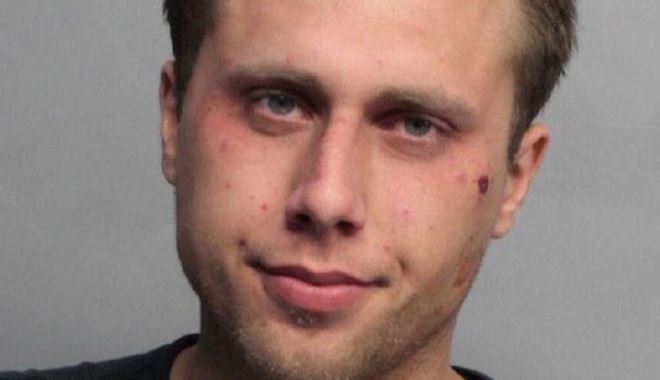 A video captured an intense scene in Miami that unfolded over the weekend after a car crash.

The aftermath of the crash saw the driver of a badly damaged silver Infiniti SUV reverse the car out of the scene of the crash, as the driver tried to hit-and-run.

Several people gathered around to block the car from escaping.

The Infiniti driver was eventually able to drive away a bit but was then blocked by another SUV around the corner.

It was at that point that people gathered around again, with some trying to pry open the car doors, with one man screaming “Don’t move,” while others snapped pictures of the Infiniti’s license plate.

One man came over and smashed several windows of the Infiniti with what appears to be a mallet.

The driver of the Infiniti eventually drove completely away from the scene, but police officers said that they later apprehended the 25-year-old, identified as Maxwell Oleg Lagutenko.

Lagutenko was charged with reckless driving, leaving the scene of an accident causing property damage, and fleeing and eluding a police officer.

The latter charge came after an officer pursued Lagutenko for a short time but cut off the pursuit because of the city’s no chase policy in the event of non-violent crimes, according to the arrest report obtained by NBC.

When officers booked Lagutenko, he seemed to be “high on narcotics,” officers wrote. He was issued a $5,000 bond on Monday, March 12.

Witnesses said they were shocked that Lagutenko wouldn’t stay at the scene.

“That’s crazy. You know, you have a crash, you stop,” witness Anthony Jimenez told Local10.

Officers told Local10 that they don’t encourage drivers or other people to try to stop someone from leaving the scene of an accident.

Instead, officers urge people to call the police with a description of the vehicle.