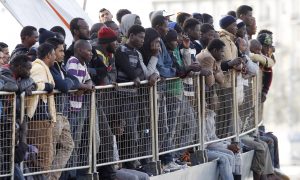 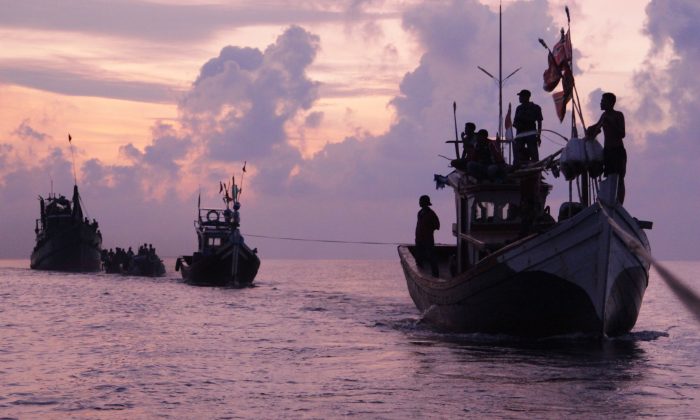 Acehnese fishermen are silhouetted by the rising sun as they rescue migrants who are stranded on their boat on the sea off East Aceh, Indonesia, Wednesday, May 20, 2015. (AP Photo/S. Yulinnas)
Europe

ROME—Hundreds of migrants who survived the capsizing of a smugglers’ fishing boat were being brought to Italy Thursday, including a Palestinian man who saved his wife by giving her his life jacket, then diving below the surface to grab their toddler daughter as she disappeared.

Military vessels and aircraft from a multi-nation operation were searching waters off Libya, a day after the 20-meter (66-foot) long boat overturned as rescuers were approaching. With seas warm and calm, rescuers expressed hopes others might be alive.

In the first hours after the accident in late morning on Wednesday, 367 survivors were rescued and 25 bodies recovered. Military officials from Ireland, whose navy vessel the Le Niamh was among the vessels on the scene, said they were given an initial estimate of 600 migrants aboard the smugglers’ boat. If that estimate holds, as many as 200 migrants might have drowned.

At least 367 survivors were taken aboard the Le Naimh, which was approaching the dock at Palermo, Sicily, by late afternoon.

The Italian Navy, which had two ships in the rescue operation, said three survivors were flown by helicopter for medical treatment aboard the Doctors Without Borders ship Dignity1. One was a man with a fractured leg; the other was a mother, with 1-year-old son, who needed dialysis.

Three other injured survivors were flown out by another navy helicopter to a hospital on the tiny Italian island, Lampedusa, south of Sicily.

When the Dignity1 arrived at the capsizing site, it was hard to tell how many were in the water, said Juan Matias Gil, a Doctors Without Borders search and rescue operations field coordinator.

“All in all, there were no more than 50 people” in the water, Gil said. “There were some bodies floating, so it was quite a shocking scene.”

During the rescue, crew of Dignity1 tossed life vests and life preservers as survivors swam frantically to boats.

Video made aboard Dignity1 and released by Doctors Without Borders showed the Palestinian family. The mother caressed the hand of her daughter Azeel, a little more than 1 year old, as the father, Mohammed, sat next to them.

“They all went into the water, with only one life jacket,” Gil told The Associated Press in Rome by Skype. “So this life jacket was with the father, who gave the life jacket to his wife, because she didn’t know how to swim. After that he saw that the baby was getting deep in the water” and in danger of drowning.

“After he came out with the baby, they were seen, they were rescued and they were brought aboard” Dignity1, Gil said.

Several Syrians were among those rescued, including a pregnant woman who at first appeared in danger of miscarriage.