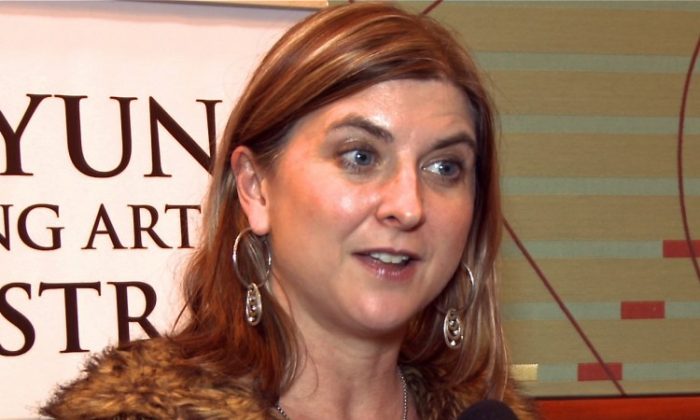 CINCINNATI, Ohio—Elizabeth Lutz was completely surprised and delighted by the Shen Yun Performing Arts performance she saw at Cincinnati’s Aronoff Center for the Arts on Feb. 4. In fact, the high school teacher is planning to share her experience with both her students and friends.

“I loved it. I didn’t know anything about the company until actually today,” she said, explaining her enthusiasm. “I’m just really excited. It’s beautiful, I loved it.”

New York-based Shen Yun is based around a company of classical Chinese dancers, who perform to an orchestra of both Western and Chinese instruments. Interspersed between the dance pieces are instrumentalists and operatic vocalists.

Given that the New York-based company was completely new to her, Ms. Lutz was excited to learn that the company aims to revitalize the traditional performing arts of ancient China and bring them to the world.

Ms. Lutz teaches English, speech, and drama and so understands performance from an insider’s perspective.

“The show itself, I thought was gorgeous: I love dance. I dance in the community dance concerts—I mean nothing big, but I do love dance. I didn’t really know anything about classical Chinese dance.”

She was impressed with the classical nature of the dance, but also the “series of highly difficult techniques, including jumping and leaping, turning, and flipping,” as the company’s website puts it.

Many audience members have been thrilled to see the beauty of the costumes and the precision of all the dancers onstage moving as one, and Ms. Lutz was no exception: “I loved all the synchronicity, and the costumes were mesmerizing.”

But most important to Ms. Lutz was that Shen Yun cannot perform in mainland China.

“After more than 60 years of communist rule in China, and especially after the Cultural Revolution, Chinese traditional culture has been all but completely demolished,” as the company website explains.

In fact, some pieces in the performance depict human rights abuses going on in China today. “I love the whole idea of arts and social consciousness being put together in such a beautiful way. The message of social consciousness didn’t in any way take away from the beauty of the art.”

“When I go home and tell my friends about the show, I will tell them that, just the concept of how these pieces aren’t being seen in China and that loss of traditional dance or just traditional culture and to be able to share in that experience here but also be more aware of human rights abuses and how it was able to spread this amazing message while simultaneously being just being gorgeous and beautiful to watch … I felt it was really authentic and I loved it for that. It is very authentic.”

Ms. Lutz’s plans to share her excitement over Shen Yun: “I picked up two programs, I want to introduce it to my students and I also have some friends who have adopted children who are Chinese and I thought I would share with them that they might like to bring their daughters to see the performance and get to have that same experience.”

Reporting by DJY and Sharon Kilarski.

Shen Yun Performing Arts has three touring companies that perform simultaneously around the world. The Touring Company will be in Raleigh for its next performance.