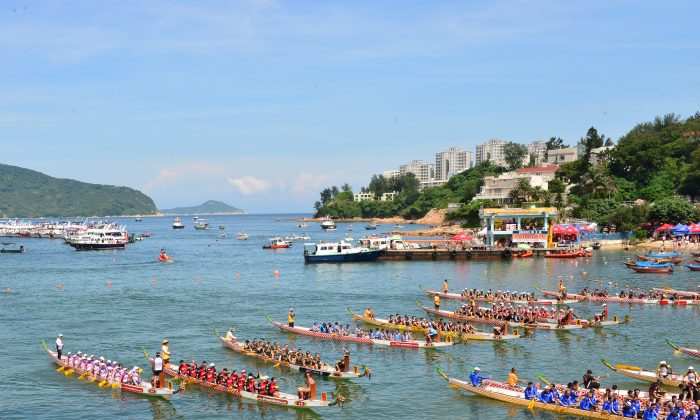 HONG KONG—Thousands of people braved the scorching weather on Monday June 2 to take part and commemorate the 2014 Dragon Boat Festival (Duanwu Festival or Tuen Ng Festival) with activities all over Hong Kong. As usual Stanley Main Beach was thronging with competitors and spectators as over 200 Dragon Boat teams competed for the various prizes.

Dragon Boat Festival, celebrated on the fifth day of the fifth lunar month is said to date back to about 300BC when a wise, kind and honest court minister Qu Yuan threw himself into the river in despair when his beloved state of Chu was overrun by the Qin.

He had given sound advice to the Chu leader in running the State’s affairs and done much to overcome rampant corruption but he fell out of favor after fellow ministers spread rumors about him and he was exiled. His advice for the Chu to form an alliance with the other five strong states was disregarded. Later the stronger Qin defeated the Chu causing his despair.

Festival activities were organized in many locations across the territory between May 29 and June 2 including Aberdeen Water Front, Cheung Chau Island, two locations on Lamma Island, Tai O Promenade and Tai Pak Beach Discovery Bay on Lantau Island.

These races which date back to 1976 when local fishermen ran a dragon boat competition, but the event now attracts 180 teams and 5000 competitors. Races include competitions for local and international teams with top teams competing in the International Grand Championships.