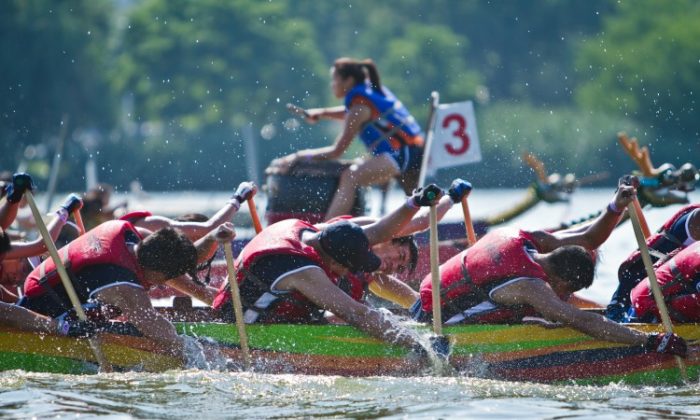 NEW YORK—Taking a break from wire transactions and loans this weekend, some JP Morgan bankers pounded their paddles at the 22nd annual Hong Kong Dragon Boat Festival. The event was held at Flushing Meadows Corona Park in Queens this weekend.

From experienced paddlers to weekend warriors, to corporate sponsors, more than 2,500 racers came from across the United States and Canada, according to David Archer marketing coordinator of the festival. There were 181 teams at the two-day event.

Archer, who has been with the festival for 13 years, has worked with “Sesame Street” and Nickelodeon.

“But this one just really appeals to me because it is a sporting and a cultural event. … It’s unusual,” he said.

It is more than a fusion of sports and Chinese culture. The festival includes a wide range of ethnic food and performances, from martial arts to live music, and lots more.

“The event is becoming more mainstream, the number of teams and events grow every year,” Archer said. Festival organizers estimated 60,000 people showed up over the two days.

Craftsmen from Hong Kong intricately designed the boats with dragon tails in the rear and lively dragonheads in the front. Each team can have 12–20 crewmen, including 18 paddlers, a drummer, and a steerer.

The entire festival takes a year to prepare, while most individual teams start practicing from June, only on the weekends.

More than just weekend warriors, JP Morgan has been competing in the Dragon Boat race for 21 years to support the local community. The team began practicing for this year’s competition last April, and has continued practices throughout the summer.

With reporting by Benjamin Chasteen.