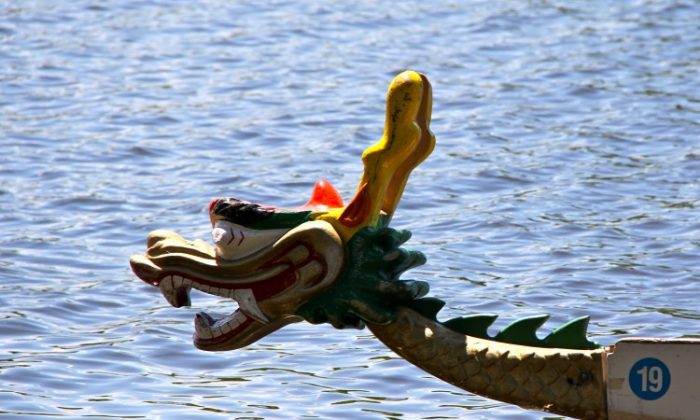 One of Ottawa’s best-attended fund-raisers, the Tim Hortons Ottawa Dragon Boat Festival, got off to a roaring start Saturday at Mooney’s Bay.

With over 200 teams competing, the races go all day Saturday and Sunday to get through the lineup of enthusiastic paddlers. Hundreds of tents dot the park displaying team banners, and where the competitors hang out to warm up, cool down, or relax between heats.

In its 19th year, this community event aims to raise $500,000 for the Ottawa Dragon Boat Foundation, established in 2003, that will give a boost to seven local charities. The charities vary from year to year. This year the tier one group is Youth Services Bureau of Ottawa.

Admission is free and the main tent stage presents a lineup of groups and solo artists that are well-loved in Ottawa. There is face painting for the children and an entertainment tent suitable for families.

The dragon boat race began as a Chinese cultural tradition of celebrating the planting of rice on the fifth day of the fifth month determined by a lunar calendar, the summer solstice, and is known to have taken place at least 2,400 years ago.

Each boat is decorated with a colourful dragon head as dragons are associated with water, such as rivers and lakes and even the clouds and the mists, and are revered in China and other parts of Asia influenced by ethnic Chinese culture. Venerating the dragon would ensure the rainfall needed for the rice to grow.

Dragon boat racing occurs all over the world now and is a very popular event in Ottawa. Teams come from far and wide in Ontario and some of the northern American states like Vermont.

Some of the teams are corporate coworkers. Others come together after shared experiences. For example, the Prior Chest Nuts is an all-female team composed of breast cancer survivors from Arnprior, Ontario. They have their own website (priorchestnuts.com) and say they are always looking for paddlers to join their group.

The Draggin Docs are 26 female physicians from Ottawa and the surrounding area. Last year they were the team that raised the most money. This year they have already collected $40,000 and counting.

The Leitrim Lightening team already won the Emergency Services and Armed Forces cup and were doing well after their first heat. It is only the second year for this group of very fit looking people from all of our Canadian armed forces who are based at CFS Leitrim in the southern end of Ottawa. Team captain Jody Clarke said they had been in the gym since February and on the water since May practicing for the races.