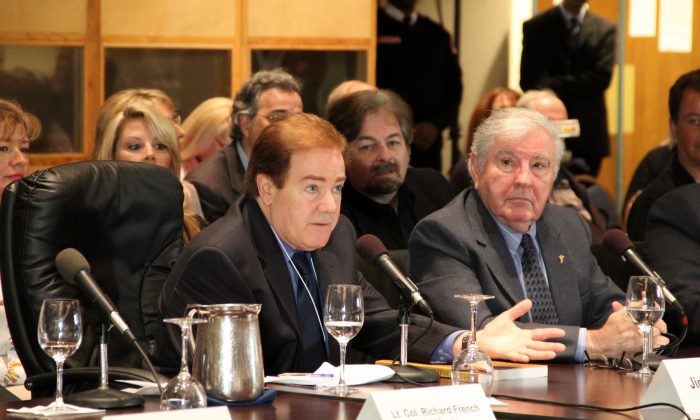 It is an ongoing experience
By Shar Adams

According to the National Aviation Reporting Center on Anomalous Phenomena, (NARCAP) there have been over 3,500 documented sightings of “Unidentified Aerial Phenomena” by military, commercial, and civilian pilots. But Captain Jim Courant, a commercial pilot for over 31 years, says there are many more sightings that are just not reported.

“It is almost astounding how many people are in the know on this subject,” he said, speaking before the Citizens Hearing on Disclosure at the National Press Club in Washington, D.C. on May 3.

Courant has been researching and studying the phenomena of UFOs for years. He has collected over 3,000 books on UFOs and extraterrestrials, and hosted a television series on the issue titled “New Perspectives” which ran for three years.

He still flies for a commercial airline and because of his exposure on television has became known as an authority on UFO’s and extraterrestrial encounters.He has been contacted, and still is, by many commercial airline and military pilots who are happy to discuss their UFO’s encounters privately but do not want to talk publicly, fearing ridicule and in some cases retaliation.

“They are afraid,” not so much about their status or their retirement benefits, but “they are more afraid for their families,” he said.

He described the experience of one pilot who was flying a 747 over the Pacific in 1980, when he came across a UFO in front of him.

“You won’t believe what we saw,” the pilot had said, according to Courant. “This thing was bigger than a 747.”

Courant said the pilot told him that when he got to his destination in Japan, he “was debriefed and told never to talk about it again.”

Courant told the hearing about his own encounter with a UFO. In 1995, he was flying near Albuquerque, New Mexico, when he and his co-pilot saw a blue green oval shape approaching from the left. “In a flash of burning white light, the object suddenly shot up at a 45 degree angle,” he told the hearing.

Four other pilots reported to the air traffic control tower that they had also seen the object.

“One pilot said it must have been a meteor,” Courant recounted, adding, “I got on and said ‘Since when does a meteor go back up?'”

When asked about his co-pilot’s reaction in a telephone conversation following the Disclosure hearing, Courant said, “He refused to discuss it and has never flown with me again.”

Courant said pilots have reported seeing a variety of craft that appear suddenly and move at speeds impossible with present technology. Reports include cigar-shaped craft, triangular craft, and some that are the size of an aircraft carrier or larger.

He says airline pilots are “very serious in their profession” and not likely to make exaggerations.

The website NARCAP, co-founded in 1999 by Dr. Richard F. Haines, a recognized specialist in UFOs and a former Chief Scientist at NASA’s Ames Research Center, has been effective at documenting sightings, but Courant says more needs to be done.

UFO sightings are only “the tip of the iceberg” in terms of what has been experienced and what is known about extraterrestrials, he said.

“There are certain things I have been privy to, but I can’t get into that here,” he told the hearing.

Courant said it was time for the United States government to come clean with what its agencies have documented and learned through decades of extraterrestrial encounters.

Airline pilots know what they have seen, he said, and should be able to talk about it without fear of ridicule.