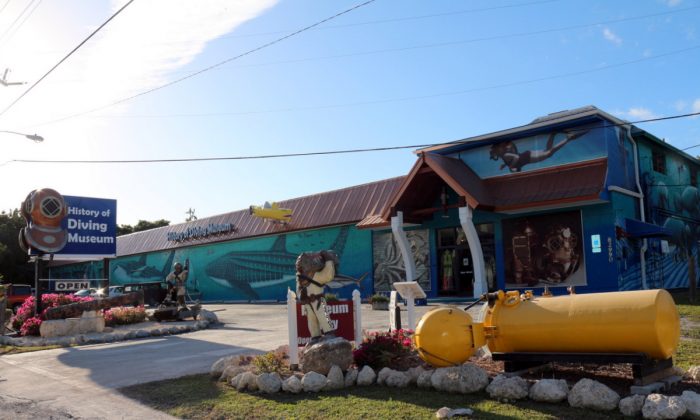 Outside view of the History of Diving Museum. Family fun where visitors can spend a hour or a day. Sally and her late husband Joe created the museum. (Myriam Moran copyright 2014)
News

The History of Diving Museum at Mile Marker 83 in Islamorada, Florida is more than a building to house memorabilia. It is a living legacy dedicated to preserving history and sharing knowledge about human penetration of the underwater world. How it got there is a story about an emergency room doctor and a surgeon. A husband and wife team from Ohio that took up diving to escape the stresses of medicine.

The couple got interested in Scuba diving in the 1960s. In the late 1960’s they purchased their first hard had diving helmet and on that day they contracted an incurable disease – the collection bug bit them. The helmet was made by Siebe Gorman from the UK and is now on display at the museum. Collecting diving helmets became a passion. Along the way the couple gathered many other pieces of equipment that was, at one time, state of the art. Gear that enabled ocean exploration, discovery and underwater work. Museum founder Joe Bauer died in April 2007, only 2 years after the couple founded the History of Diving Museum.

“We always planned to have a rotating exhibit, one that can travel,” Dr. Sally Bauer said. “My husband framed an eight-foot door with that in mind. Our new project will demolish five storage units…” Zoning and building in the Keys is not easy. It takes a lot of planning and approvals. When Joe and Sally bought a self-storage building in which to develop the museum, they were not allowed to tear down the units and build everything all at once.

The building was remolded to withstand hurricane winds, a critical requirement in the Keys. It is enhanced with a beautiful painted mural and made alluring with a diver’s mono-place decompression chamber, hard hat gear and artistic sign outside. It is a place where tourists can stop and enjoy an hour or spend many hours browsing among the exhibits.

The museum’s extensive library houses the Bauer’s collection of some 2,500 rare books about diving and ocean exploration. The collection of diving artifacts is one of the largest in the world. The library, available to members and researchers, is also unique with the oldest book dating to 1535. The room is beautifully appointed with dark wood, glass-fronted shelves. The library is used for teaching programs and free seminars held the third Wednesday of every month.

How did two successful physicians get from serving medical needs in Ohio to the Florida Keys? To hear Sally tell it, it was a series of steps. First Scuba diving in the Keys in the mid 1960’s, then collecting tropical fish, then starting a salt water aquarium club in Ohio, then retiring to Islamorada in 1997. The couple was always expanding their collection of antique diving gear. Finally they built and opened the museum in 2005.

One of Sally’s ideas for a traveling exhibit is to feature sponge diving. “Key West sponge fishermen did it by hooking from boats. Greek sponge divers out of Tarpon Springs were helmet divers. There was significant and often deadly rivalry between them. The Greek divers said the hookers were tearing up the bottom.”

“Another idea for a traveling exhibit incorporates diving equipment used in advertising. We have an old Pepsodent toothpaste ad from the 1930s that features a secretary wearing a diving helmet to ward off ‘morning breath.’ It is funny and creative how they made these ads.”

“I’ve also talked to groups about an exhibit about the story of our ‘wounded warriors’…you don’t want to be sitting there at the end of your day and say ‘I’ve done all my projects.'” Sally said. She is dynamic, attentive and ready to laugh and joke. The museum has become a fulcrum for interesting projects. It is a magnet that draws groups to the Keys.

Sally is a member of the Women Diver’s Hall of Fame. She has hosted the WDHOF group at the museum recently with a reception around the swimming pool and beautiful gardens at her home. University students have stayed in the guest house that was once a cottage for her mother. Sally’s life is filled with energy.

“I don’t dive much any more. Two problems. I live right by the ocean so we could go out any time, however, when we started the museum Joe used to say we worked 28 hours a day, 8 days a week. And then I’ve always suffered from motion sickness. I thought in my old age it would get better. It didn’t. I look out and if I see one wave I get sick.” Sally laughed

Her seasickness is legend. “I got seasick in Cayman. I was the only diver laying on deck with a towel over my head.”

“I tried to take house guests out to snorkel on Alligator Reef but they lose faith in the captain if she’s seasick – so I eventually sold the boat after Joe’s death. There are beautiful days in fall when the ocean is like glass.”

“With the loss of my dive buddy it took the joy out of diving. When you dive with somebody for 42 years…we consumed the same amount of air. We’d come out about the same time…”

Sally didn’t dwell on her loss for long. It was happy memories not sadness that she shared. “We did fish studies underwater. We studied sex underwater,” she laughed.

“We studied the sexual behavior of ornamental aquarium fish. It can’t be done here in the Keys because people collect fish. We did it in Cayman. To this day I can take you to a spot where a male queen angelfish sleeps with his harem of females. Gotta have something to stay in diving. That was our thing, studying animal behavior.”

Where they bought their house is a perilous strip of land that has been rocked by hurricanes and flooding. “Katrina and Wilma caused flooding. Rita flooded from the ocean to the road. Our dock was underwater. Water was this far from coming in the door.” Sally’s thumb and index finger didn’t leave much room between them.

“The place was built after Hurricane Donna so I have an old Keys house like a fortress. Unfortunately there is living area on the ground floor. One of these days it’s going to flood. But the museum is a whopping 11 ½ feet above sea level and there are no windows,” Sally said. If there really is a disastrous hurricane some salvage diver is sure to find lots of brass diving helmets out in the Bay.

Sally described some of their favorite diving helmets: “These two were made by descendants of famous helmet makers. A grandson of the Galeazzi family and grandson of Antony Lerios. They came from Greece and mentored under Avgerinos” Sally picked up her glasses to read inscriptions on the helmets made especially for the Bauers by descendants of great helmet makers from Italy and Greece.

“I’ve worn glasses since I was ten…this is a famous Robinson helmet from Australia. The Australians didn’t make many helmets,” Sally explained. The worked brass bore the Robinson name and was marked Melbourne 1945.

The History of Diving Museum is a living legacy that Joe and Sally Bauer created out of their love for each other and a passion for history and historical diving equipment. The museum houses a unique collection that will be enjoyed by generations of visitors. Programs and events at the museum and Sally’s planned traveling exhibit will continue to generate interest and inspire future pioneers of ocean exploration.