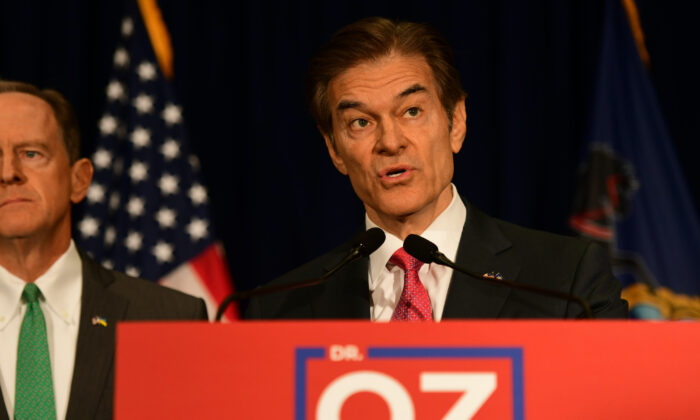 Dr. Oz Rushes Into Crowd, Stays With Woman Who Collapsed at His Rally: Campaign

Dr. Mehmet Oz, the GOP nominee for Pennsylvania Senate, jumped over a rail and rushed into a crowd to help a woman who appeared to have collapsed in Bucks County, according to his campaign and reporters on the scene.

Later, Oz told the crowd, “Rita, God bless her, is doing okay,” referring to the woman’s name, according to reporters. Photos published online appeared to show Oz with the woman.

A spokesperson for Oz’s campaign said the woman fainted and Oz, a retired cardiothoracic surgeon who has long appeared on television, tended to her until paramedics arrived. The woman was conscious and was taken from the event, the campaign told the Philly Inquirer.

On Twitter, Oz wrote that more than 1,200 people turned up for his event in Bucks County on Saturday.

And during the campaign event, Oz again targeted the Democratic Senate nominee, Lt. Gov. John Fetterman, for not scheduling a debate. Fetterman has been recovering from a stroke in May, and recent footage taken from events shows that he struggles to speak.

Last week, Fetterman issued a statement saying that he would debate Oz, who has been endorsed by former President Donald Trump and other prominent Republicans. However, he did not pick a location or date.

“We’re absolutely going to debate Dr. Oz, and it was always our intent to do that,” Fetterman stated, adding that “it has simply only ever been about addressing some of the lingering issues of my stroke, the auditory processing, and we’re going to be able to work that out.”

But Oz fired back on Saturday, saying, “To actually agree to a debate you have to actually have a date, and a location,” according to reporters. Oz has argued that a debate between him and Fetterman should be held before early voting starts in the commonwealth.

Around the same time as the event, Fetterman’s team criticized Oz for having a home in New Jersey and claimed he doesn’t represent Pennsylvanians.

“Oz continues to bring in fellow out of staters to try and save his failing campaign because he wants to distract from the fact that he’s a complete fraud who doesn’t know anything about what Pennsylanians’ lives are actually like,” Jack Doyle, a spokesperson for the Pennsylvania Democratic Party, told the Inquirer.

On Sunday, Fetterman is scheduled to hold an event in Montgomery County along with a top Planned Parenthood official to emphasize his pro-abortion stance.

The Epoch Times has contacted Oz’s campaign for comment.