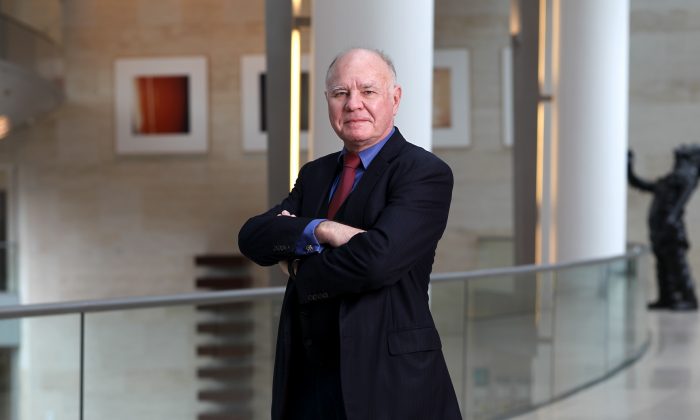 Dr. Doom explains why central bank intervention is leading to inequality and how to invest in this risky environment
By Valentin Schmid
biggersmaller
Print

They call him Dr. Doom and for good reason. Dr. Marc Faber, author, investment adviser, and publisher of the Gloom, Boom & Doom report, usually emphasizes the risks in the financial system and never minces his words.

However, his views are more nuanced than most people think, and his advice for investors is more pragmatic than idealistic.

Epoch Times spoke to Faber about central bank manipulation of financial markets, the reasons for income inequality, and how to invest in this environment.

Epoch Times: How long can the central banks manipulate markets?

So the madness in the present time may go on. In a manipulated market, it won’t end well, but you don’t know when it will not end well, and how far the manipulation can last.

Epoch Times: And then at one point, the central banks own everything.

Mr. Faber: They could essentially monetize everything, and then you have state ownership. And through the central banking system, you introduce socialism and communism, which is state ownership of production and consumption. You would have that, yes, that they can do.

The BoJ owns more than 50 percent of Japanese ETFs (exchange traded funds), which own large parts of the underlying companies. So indirectly they may own 20 percent of the Japanese companies, and they can go up to a higher level.

I don’t think the central bankers are intelligent and smart enough to understand the consequences of their monetary policies at present. They focus on inflation but in my view they shouldn’t do anything. They don’t focus enough on what it does to the average standard of living of the people, to the average household income.

Epoch Times: If the policies are similar, why haven’t we seen hyperinflation like in Zimbabwe or Venezuela?

Mr. Faber: The developed market central banks can go on for quite some time. If Zimbabwe prints money, the pain is more obvious right away because if you are Zimbabwe, and you print money and the others don’t, and the currency collapses, and you feel the pain much sooner.

If the major central banks, the Fed, the European Central Bank (ECB), the BoJ, the Bank of England, and the Chinese monetize and print money in concert and agreement with each other, they all talk to each other; then the currencies don’t collapse against each other. There may be fluctuations, but we don’t have a general collapse of a currency.

Paper money, in general, can then collapse, and it has to a large extent against asset prices like real estate around the world over the last 30 years, against equity prices, against bond prices—which have been rallying since 1981—and against precious metals since 1999.

Asset price inflation is less obvious to the average person in the street. The average American has no money, so he doesn’t care if prices for paintings and real estate go up—until it touches him.

It’s nonsense to claim that inflation is only going up 1 percent per year in the United States. The cost of living of a typical family is going up much more than that—insurance, transportation, schooling are all going up.

For example, health care premiums for insurance policies [are rising], so the typical household is being squeezed. The central banks don’t care about that; they don’t look at it.

I suppose the system will collapse before we become like Venezuela. In the West, if they start to print money, the end game will be brief. Within five years, I expect the system to implode.

Epoch Times: How can we avoid a collapse?

Mr. Faber: You better ask the bureaucrats what their plans are. They had zero rates since December 2008; soon eight years [passed], and that hasn’t boosted economic activity for the average household, not in Japan nor the United States nor the EU. Now they talk about fiscal spending.

We already have large deficits but no deficit is large enough for the interventionist, so they will boost fiscal spending. They will finance deficits by issuing government debt, which the central banks will monetize. The Treasury will issue debt, and then the Fed will buy all these debts. Of course, that will not end well, but it will postpone the problem for a while.

Then they will find some academics who will blame wealth inequality on the evil capitalists who made so much money out of asset bubbles.

They will blame the economic woes on these people. To some extent this is true. But the rich people did not create the inflated asset values; it was the central banks, by slashing interest rates to zero and negative interest rates in many countries.

First, you create mispricings through artificially low rates and negative interest rates and you boost the income and wealth of the super-rich. It’s at best the 0.1 percent that really benefit from asset inflation, at the cost of all the people that have no assets and so you have this rising wealth inequality. So we have to tax the rich people and tax them more.

Taking money from the rich is appealing if you go to voters, and you say to them, “Look, the reason the economy is doing so badly, it’s because of the rich people, the billionaires. We have to take 20 percent away from them and give it to you.” You can be sure that everybody will vote for that because the wealthy are a minority. This is what happens after monetary policies completely fail.

Some well-connected people will hide their wealth but a lot of people won’t. Even if they take 50 percent from the richest, it’s not going to help. The next step will be to take money from less wealthy people; the interventionists will go all the way.

Epoch Times: How do you invest in this environment?

But they are not cheap by traditional valuation methods.

However, I think it’s dangerous for someone to say: “We all agree that it will end badly, so we keep 100 percent of our money in cash.” First, you have to decide which cash.

Number two, we don’t know what the time frame until it ends badly is. And in an extreme money-printing environment, the Dow Jones Industrial Average can go to 100,000.

It may likely not go up against precious metals, but it can go up in nominal terms endlessly. It’s not going to help the typical household. I have seen many hyperinflating economies, and in each case, the standard of living of average people declined.

In this particular instance, the people and companies take the money out of the financial system and store it in cash in a vault.

The measure to implement negative 5 percent is not going to work very well, so one way to make it work is to abolish cash. You can still hoard real estate, food, cigarettes, and precious metals, but you can’t hold cash anymore. So that is likely to happen, in my view, if they go all the way.

Epoch Times: What about gold?

Mr. Faber: I have made a very compelling case for gold in the late 1990s and silver and platinum. I wrote a book, “Tomorrow’s Gold,” which was not about gold but the rise of Asia. The gold price rose very sharply between 1999 and 2011, and it corrected after September 2011. It probably overshot, and the mining shares overshot on the upside, so they corrected.

Now, between last October and December, we had major lows in gold stocks and precious metals prices from where the prices will continue to rise.

They are going to go up tomorrow or in three to five years, I don’t know. If you keep printing paper money, the supply of money increases and assets that are in short supply or limited supply—whether it’s a Ferrari or a Gaugin painting—they are in tight supply, so they will appreciate.

Epoch Times: But you would not only buy cash and gold mining stocks, right?

Mr. Faber: I think holding all your assets in cash is very dangerous. I want to be diversified; I hold some cash, bonds, equities, some real estate, and some precious metals.

The moment you diversify, your returns are suboptimal, but it’s likely to preserve your capital.