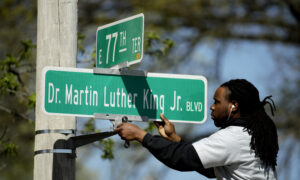 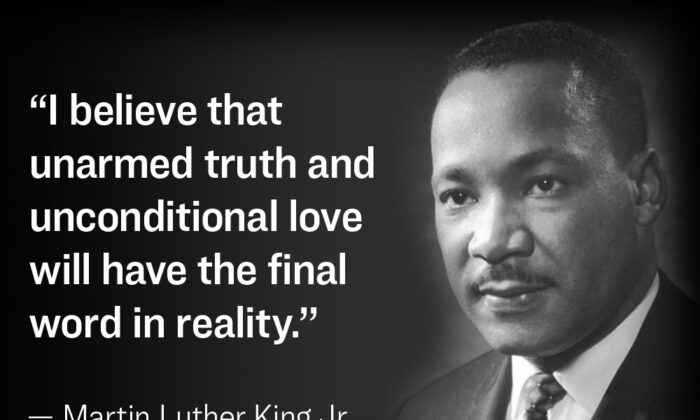 Dr. King: No Despair About The Future

By Words of Wisdom
biggersmaller
Print

“We must use time creatively, in the knowledge that the time is always ripe to do right. Now is the time to make real the promise of democracy and transform our pending national elegy into a creative psalm of brotherhood.”

That was from Dr. Martin Luther King, Jr.’s 1963 “Letter from a Birmingham Jail.” The letter was written while King was detained in solitary confinement for taking part in the Birmingham Campaign against racial segregation.

After reading an article published in a local newspaper about religious leaders condemning his nonviolent demonstrations, King began to put together his response to them, which led to this famous letter.

At first he wrote in the margins of the newspaper he was given; he later moved on to using scraps of paper, and then finally a legal pad provided by his lawyers. After his letter was compiled and typed out by his associates, it was 21 pages of double-spaced type long.

“I can assure you that it would have been much shorter if I had been writing from a comfortable desk, but what else can one do when he is alone in a narrow jail cell, other than write long letters, think long thoughts and pray long prayers?” writes King.

“I have no despair about the future,” he writes near the end of his letter. “I have no fear about the outcome of our struggle in Birmingham, even if our motives are at present misunderstood. We will reach the goal of freedom in Birmingham and all over the nation, because the goal of America is freedom.”

King was arrested 29 times during his fight for civil rights.

But despite this, his rational hope and quiet optimism would produce widespread change. One year after he wrote that letter, Congress passed the Civil Rights Act that outlawed racial segregation, and a year after that, it passed the Voting Rights Act that bolstered African Americans’ right to vote.

When accepting his Nobel Peace Prize in 1964, King’s speech left us with one of his most iconic lines:

“I believe that unarmed truth and unconditional love will have the final word in reality. This is why right, temporarily defeated, is stronger than evil triumphant.”

These words—of goodness, hope, faith, and resilience in the face of injustice—serve as a reminder that, when we call upon our higher nature, it can guide us through the darkest of times.

At the Epoch Times, we understand that one day, future generations will look back to how we lived our lives today for guidance and strength—just as we look to our history today.

It’s this thought that gives us the motivation to stay true to our principles through whatever obstacles may come our way. If you like what drives us, please consider supporting us with a digital subscription.

It’ll help us stay independent—and free to follow our values—when big tech and other organizations are trying to shut us down.