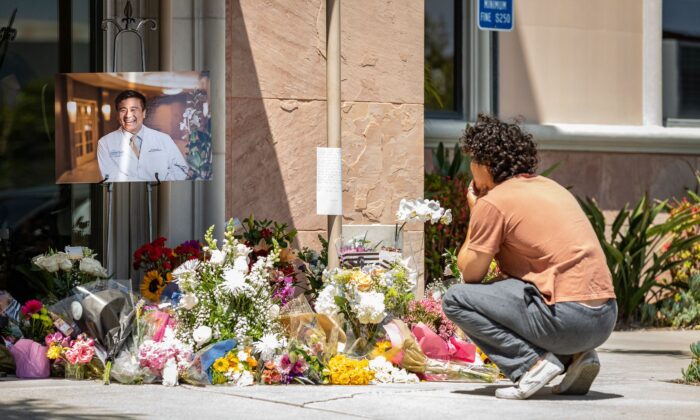 A young mourner at a memorial site for shooting victim Dr. John Cheng, whose photo sits on display at the entrance of South Bay Medical Group in Aliso Viejo, Calif. on May 17, 2022. (John Fredricks/The Epoch Times)
Southern California OC News

Dr. John Cheng Remembered by Friends and Patients as ‘Best Doctor’ and ‘Hero’

ALISO VIEJO, Calif.—Residents and patients are mourning Dr. John Cheng outside of his office in Aliso Viejo, California, with flowers and hand-written letters commemorating the compassion and selflessness he embodied throughout his life, which was cut short by a May 15 mass shooting at a church in the neighboring city of Laguna Woods.

“What inspired me to get involved in medicine in the first place is I come from a family of physicians, and I saw the care that my father viewed upon his patients in a small community in East Texas,” Dr. John Cheng said in a 2012 video introducing his medical practice. “It’s those small-town values that were engrained in me when I was younger that really help create this sense of community, and in this modern society in these modern times, we miss a lot of that.

“With each individual patient that comes in our doors is that … we can touch their lives for the better.”

Ten years later, a joyful photo of Cheng, 52, is displayed on a stand, surrounded by colorful flower bouquets in front of the South Coast Medical Group offices in Aliso Viejo.

Kneeling gently with his eyes watery, a young man partook in a moment of silence to mourn the loss of a man who had touched his life for the better.

Later, a woman in blue scrubs with a stethoscope around her neck slowly walked over, stared at the image of her colleague, and neatly reorganized the bouquets in the sunny afternoon breeze, before quickly walking back into the building.

“Dr. Cheng was the best doctor I’ve ever had,” read a letter taped to a pole near his smiling photo. “I will miss him greatly as my doctor, a person, and at the end, a hero.”

On Sunday, David Wenwei Chou, 68, opened fire at around 1:25 p.m. into a group of elderly Taiwanese churchgoers at a lunch gathering at Geneva Presbyterian Church in Laguna Woods—after blocking exits by chaining, nailing, and supergluing multiple doors of the church.

In response, Dr. Cheng, who was also an accomplished martial arts instructor, was shot three times after attempting to disarm the lone gunman who also injured five other people with a semi-automatic handgun.

After Chou’s weapon was jammed, congregants had the time they needed to subdue him by hitting him with a chair and tying his legs together with an extension cord for arriving law enforcement officers.

“Dr. Cheng is a hero in this incident,” Orange County Sheriff Don Barnes said at a press briefing on Monday.“Without the actions of Dr. Cheng, there is no doubt there would be additional victims in this crime.”

Orange County District Attorney Todd Spitzer said at the briefing that Dr. Cheng understood that “there were elderly everywhere, and they could not get out of the premises because the door had been chained, and after others had been shot, he took it upon himself to charge across the room and to do everything he could to disable the assailant.”

“[Dr. Cheng] sacrificed himself so that others could live,” Spitzer added.

The celebration was to honor the recent return of Pastor Billy Chang, the person who—after Dr. Cheng fell to the ground—successfully stopped the suspect by hitting him with a chair.

“I am heartbroken, for the loss suffered by Dr. Cheng’s mother and family,” Pastor Chang wrote in a letter sent back to the South Gate Presbyterian Church in Taiwan, where he pastors for the past two years. “Before the service, we even hugged and encouraged each other.”

Chang stated that Dr. Cheng was not a regular guest of the Taiwanese aggregation because of language barriers, but as “a filial son,” Cheng accompanied his mother that day.

Investigators said Chou’s motives appear to be a “politically motivated” incident related to the political tensions between China and Taiwan.

Chou remains jailed without bail and on suspicion of 10 criminal counts, including one count of capital murder and five counts of attempted murder.

He is expected to be arraigned at the Orange County Superior Court on June 10 while the Federal Bureau of Investigation has opened up a hate crime investigation into the incident.

Dr. John Cheng is survived by his wife and two children.