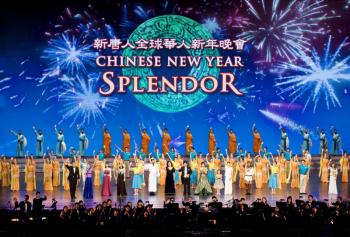 Traditional Chinese Performance Embraced by US

American audiences are bracing the cold and stepping out for an unusual cultural experience – a performance of music, song and dance based on traditional Chinese culture.

The Divine Performing Arts (DPA), a New York based performance company, has been drawing packed houses since it commenced its North American tour in late December last year.

It has played in over 30 cities in the US including four shows in New York’s Radio City Music Hall, and six days at the Kennedy Performing Arts Centre in Washington where people queued for standing room only.

The performance group is unique in that it is largely comprised of expatriate mainland Chinese or those of Chinese origin, who have come together over a shared interest in reviving traditional Chinese performance arts.

Some of the performances tell stories from ancient China handed down from generation to generation; others reflect the ethnic mix that has influenced China over its 5000 year history. Still others go deeper into the spiritual beliefs that are the foundation of traditional Chinese culture.

A number of China’s top classical performers are part of the group, including one of the mainland’s most celebrated tenors, Guan Guamin. There are also professional, opera singers, dancers, choreographers and classical musicians.

American audiences it seems have been intrigued to discover a part of China they were not aware of.

“We’re kind of new to this. The music is great, the dance is great. It’s just a culture shock for us Americans, something different. I love the culture,” said an aerospace engineer after seeing the show in San Diego,

In Brooklyn a classical music teacher explained, “For somebody who knows really little about Chinese culture, it made it very interesting to me.”

Renown US cellist Christine Walesvska is a long time fan of the DPA. It is the fourth year in a row that she has the seen the company’s annual production.

She believes the performance is popular because of the company’s dedication to an authentic Chinese cultural renaissance. The DPA is “bringing back for the world to see the traditions of the ancient Chinese and I think that’s what's so fantastic,” she said after seeing the show in New Yorks Radio City Hall.

Much attention has also been focussed on the music – not only the original scores but a live orchestra which tours with the company and features both Western and Chinese classical instruments.

“It is an odd combination, but it works,” said violinist Joshua Bell who saw the show at the Kennedy Centre in Washington.” It is nice to hear the Chinese instruments.”

Why this mix would appeal to American audiences however seems to hinge on the performance groups’ ability to make universal the traditional elements of Chinese culture.

“I love the stories, very typical. I think they transcend the cultures. You know they are as applicable to American life as they are to Chinese life, and I found a lot of humour in them too, said an oil company manager from Pasadena in California.

Divine Performing Arts International Company will be touring in Australia from March 29 to April 27. For more information see DivinePerformingArts.org