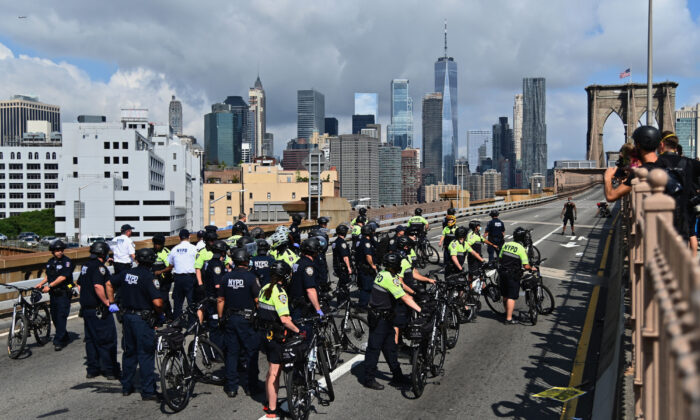 People get arrested on the Brooklyn Bridge after about a dozen Black Lives Matter protesters briefly shut down the bridge in New York City, on July 15, 2020. (Angela Weiss/AFP via Getty Images)
US News

At least three NYPD officers sustained serious non-life-threatening injuries after “Stop the Violence” marchers were met by counter-protesters as they marched across the Brooklyn Bridge.

The demonstrations started peacefully Wednesday morning as the large group marched toward the Brooklyn Bridge, where tensions started after about a dozen Black Lives Matter activists countered the march and briefly shut down the bridge, police said.

The clashes between pro-police and anti-police protesters ended with 37 people being arrested and several officers, including Chief of Department Terence Monahan, were left with injuries, ABC7 reported.

“Three officers violently attacked by protesters crossing the Brooklyn Bridge. The officers sustained serious injuries,” the NYPD wrote on Twitter, adding a video of the attack.

This is not peaceful protest, this will not be tolerated. pic.twitter.com/cYuDX8G7ku

In the video, NYPD officers appear to be attempting an arrest on someone when a man rushes toward the officers and hits them several times with a large object that appears to be a walking cane.

“This is not peaceful protest, this will not be tolerated,” the department said. Monahan, who is the highest-ranking member of the department and joined the “Stop the Violence” march, is seen on one of the pictures with a bloodied face.

The NYPD released pictures of the officers that were injured following the clashes.

These are the injuries our officers sustained. pic.twitter.com/KI9wQKywHH

The police chief reportedly broke his finger after he was punched during the clashes with counter-protesters on the Brooklyn Bridge, former NYPD Detective Rob O’Donnell wrote on Twitter.

“If the highest ranking member of the NYPD who has a 36,000 member Police Force at his side can be assaulted in broad daylight, where do you think you the average NYC Citizen stands if targeted by criminals?” O’Donnell wrote in another post.

The other two officers who were injured in the altercation were taken to a hospital to get stitches, police said. The charges against the 37 people who were taken into custody are still pending.

A Black Lives Matter activist who joined the counter-protest told CBS New York the “Stop the Violence” marches are too supportive of the police.

The “Stop the Violence” march was initiated due to the sharp rise in gun violence across the city in recent months and many former NYPD officers, religious demonstrators, and supporters joined the march.

“We are fed up and tired of seeing a 1-year-old shot, a 12-year-old paralyzed,” the leader of the march and president of the United Clergy Coalition, Bishop Gerald Seabrooks, told the station. “No, we need the police. What we’re saying is we don’t want police brutality.”

A pro-police demonstrator told ABC7 the march was organized because “we support the police and we need their help because this city is becoming a war zone.”