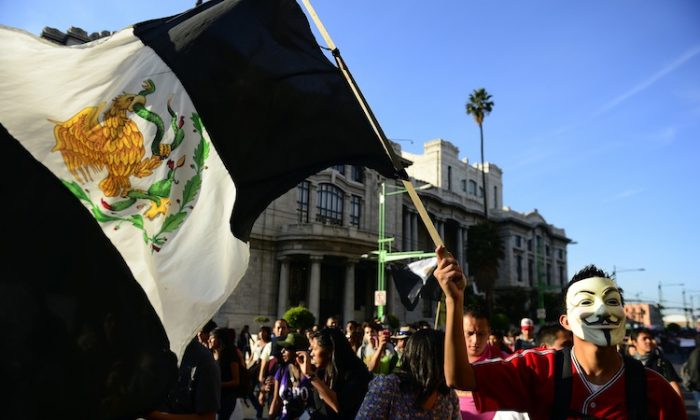 Members of the movement called #YoSoy132 march during a protest Dec. 3, 2012 in Mexico City calling for the liberation of fellow detainees after clashes with police three days ago during the inaugural ceremony for incoming Mexican President Enrique Pena Nieto. (Alfredo Estrella/AFP/Getty Images)
Americas

Around 69 people were jailed in Mexico City for taking part in riots that damaged businesses and private property during protests against President Enrique Pena Nieto, who was inaugurated Saturday.

Those who were arrested were charged with “disturbing the public peace” and “rioting” and could face between five and 30 years in prison, reported Univision on Tuesday.

However, protest organizers accused police of using excessive force during the demonstrations and alleged riots that took place on Saturday. They said police detained the 69 people to intimidate others.

“They weren’t doing anything but voicing their opposition against an imposed president who is bad for the country,” protester Aura Sorita, whose friends were detained on Saturday, told the broadcaster on Monday.

“The only thing they were doing was trying to help another compañero [companion] who’d fallen to the floor,” she claimed. “That was enough motive for the police to hit them, and detain them too.”

According to The Associated Press, several hundred protesters smashed plate glass windows and some threw Molotov cocktails at police during Saturday’s incident. Banks, stores, and hotels were vandalized, while furniture was dragged into Mexico City’s streets and made into bonfires.

On Monday, Nieto signed an accord with opposition parties to boost education, pensions, and to spur economic growth.

“The country must be transformed without delay,” he said, according to Fox News Latino.