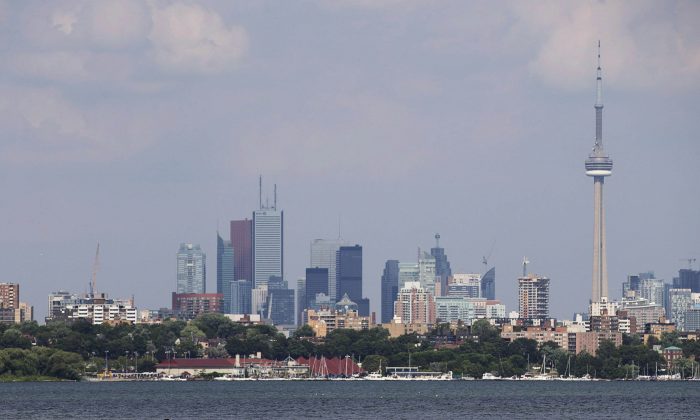 The Toronto skyline on July 17, 2013. Pauline Lierman, director of market research at Urbanation, says the supply of condos has dropped this year in the downtown core, with currently just a 5- to 6-month supply. (The Canadian Press/Michelle Siu)
Canadian Content

Downtown Toronto at Risk of an Under-Supply of Condos: Urbanation

Pauline Lierman is the director of market research at Urbanation, the condominium market’s “industry bible” for stakeholders in the high-rise condominium industry in Toronto and the surrounding area.

Lierman provided details from Urbanation’s Q1 report which covers the state of the market to the end of March 2015.

Overall, she said, Toronto experienced a strong first quarter. Over 4,400 sales of actual condominiums—not a record but a solid number—made up approximately 65 percent of the total market sales. Most of this activity (75 percent) happened in the city of Toronto. Definitely, the trend has been in the downtown core. Lierman explained that generally, people want to live close to transit and close to the amenities of downtown. Investors also prefer to buy in the city where suites can be rented out quickly and easily.

She talked about clusters of development within the city. For example, the Entertainment District was a hot cluster of development a couple of years ago, but it is now almost built out. Liberty Village is another example. The market has definitely shifted east, with a lot of development happening in the proximity of the upcoming Pan Am Games area, Corktown, and Leslieville. She emphasized that the recent connection of the Martin Goodman trail to these areas will have a great effect on the marketability of projects here. People will be able to bike and run between Queens Quay and the Corktown area, which is a great amenity for residents.

Regarding present market conditions, Lierman explained that currently, contrary to some of the stories circulating about Toronto being over-supplied, there isn’t enough new product on the market downtown to keep up with the demand.

“We honestly believe that downtown Toronto is in danger of becoming under-supplied with condominiums,” she said.

“Typically there is about a 10-month supply of new condos on the market. Right now we have about a 5- to 6-month supply. We’ve seen it really come down this year in the downtown core. Buyers and investors are still very value-driven, so we haven’t this shortage impact on prices yet.”

There should be some new product coming in the fall. There are many proposals that have not yet been given the green light to proceed.

In Q1 of this year there were just over 3,500 new units released in 15 new projects on the market.

Right now Urbanation is tracking about 20 projects that have currently launched in Q2. That’s a little less than last year. In comparing Q2 this year and last, Lierman noted that last year there were many very large projects on the market.

This year there are fewer large projects and more medium to small projects.

One of the hottest areas so far this year is Yonge and Eglinton, where there are several major condominium projects on sale and upcoming.

However, Lierman cautioned, “For people looking for good two-bedroom units in this city, it’s not easy.”

There seems to be a definite need for larger units.

As for where the bargains can be found, Lierman said that downtown east is probably the best bet for product and value—with the development of the west Donlands, the south Portlands, and the Pan Am Games, there will be plenty of new product on the market that is affordable. As well, this area is gaining traction as a cool, hip neighbourhood with lots of parks and charm. The push will be east, east, east.

Downtown East tends to be more end user-driven than investor-driven.

Lierman also talked about the Kingston Road Revitalization area, noting that it’s a hot upcoming area within an established neighbourhood that is well-served by transit and tends to offer somewhat larger units.

In conclusion, Lierman believes that sales will be a little less than last year, but not by much. Last year there were 21,605 sales of new condos in the GTA—the third best year. Anytime sales break 20,000 units in a year, it’s a good year. She expects about 17,000 sales this year—with a lot occurring in the fall. She believes that the number of larger projects in 2014 contributed to the boost in sales. With smaller projects this year, there is less product to sell.