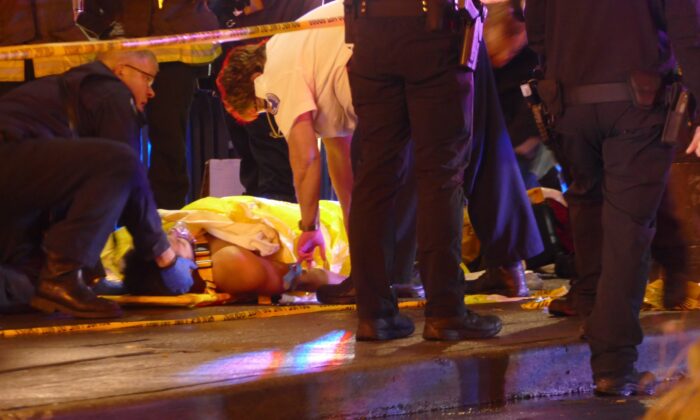 Officers attend to one of several shooting victims on Jan. 22, 2020, in Seattle, after a gunman opened fire in the heavily trafficked downtown area. (David Silver via AP)
Crime and Incidents

A shooting in downtown Seattle Wednesday night killed at least one person and wounded seven others during the rush-hour commute, according to police, who have not apprehended a suspect.

Officials are searching for at least one suspect in the case, KOMO News reported, citing authorities.

The shooting unfolded at around 5 p.m. local time near Pine Street and 4th Avenue, officials said. Seven people were rushed to Harborview Medical Center. A 55-year-old female is critically injured, and a 9-year-old boy is in a serious condition. A 35-year-old man, a 21-year-old man, a 34-year-old man, and another man are all in a stable condition. A 49-year-old man with a leg wound was released from the hospital. The woman killed at the scene is thought to be aged in her 40s.

Officers investigating shooting near 4th and Pine. Multiple victims. The suspect has fled, and police are searching for him. Officers and medics are providing first aid to the injured. Additional information to come.

“Officers investigating shooting near 4th and Pine. Multiple victims. The suspect has fled, and police are searching for him. Officers and medics are providing first aid to the injured. Additional information to come,” the Seattle Police Department wrote on Twitter.

“We’ve locked down the scene,” Seattle Police Chief Carmen Best told NBC. “This is not an active shooting at this point, but we are collecting evidence and information.”

The motive for the shooting is not clear.

“Everyone just went to the ground and as we were looking out the windows people were running,” a witness told local station KING5.

“We heard what sounded like a bunch of automatic weapon fire—just 30 to 40 shots, just ‘Bam-bam-bam-bam-bam!'” exclaimed another witness to KOMO. “We saw people running up the sidewalk toward the McDonald’s and hiding around the corner.”

“It was pretty frightening when we saw people running because you don’t know if it’s going to be gunshots or firecrackers,” the person said.