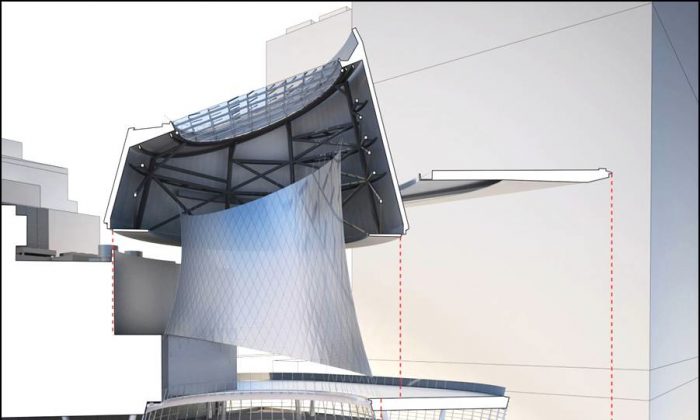 The main feature of the Fulton Center, the oculus, allows light to penetrate deeply into the building. The oculus was designed by Grimshaw Architects in partnership with artist James Carpenter. (Courtesy of the MTA)
US

NEW YORK—The Fulton Center is set to be a new transportation and retail gateway for Lower Manhattan upon its completion in 2014.

The Fulton Street subway station will allow for easier and more intuitive transit between subway lines A, C, J, M, Z, Nos. 2, 3, 4, and 5, and connections to the E, R, and No. 1 lines. The center will also eventually connect to the World Trade Center site, PATH trains, and Hudson River ferries at the World Financial Center.

The MTA worked with Grimshaw architects and Arup engineers to create a marvel for daily commuters and tourists in Downtown Manhattan.

“One of the goals, of course, is to build a great public space,” said Uday Durg, senior vice president and program executive for Lower Manhattan Projects at MTA Capital Construction. Durg hosted a tour to outline the main architectural elements of the Fulton Center, Oct. 1.

The 12-foot-high ceilings and open spaces contribute to the large scale of the building.

The design features a vast oculus (circular window) that reaches 106 feet into the sky directing light down through the structure and continuing 40 feet below street level.

“People have concerns when they go underground that they don’t know where they are going. Light is something that can orient people,” Durg said.

The oculus design was developed in partnership with artist James Carpenter. Hundreds of diamond-shaped panels reflect light down into the building’s space.

Another feature of the project is the inclusion of the historic Corbin building. The MTA made a commitment to restore the nine-story masonry building as part of the development. The building was designed by Brooklyn-based architect Francis Hatch Kimball in 1888 under the direction of Austin Corbin, the president of the Long Island Rail Road.

“When people come up the escalator, they can see all the historic elements of the building, to give the public the feel of the history. It’s the old and the new,” Durg said.

While certain parts of the development are gradually opening, such as new entrances to subway lines, the Fulton Center is due for completion in June 2014.

A rendering slices through the Fulton Center station, showing how the building is centered around the main oculus, which allows light all they way through to the underground concourses.