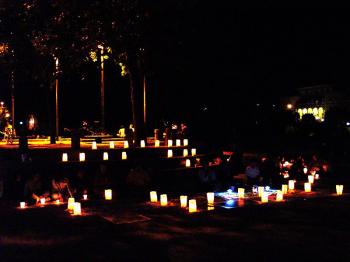 The candlelight vigil in Madison to expose the intensified arrests and killings of Falun Gong practitioners the Chinese Communist Party is undertaking to “prepare” for the 2008 Beijing Olympics. (The Epoch Times)
US

Downtown Madison Lights Up for Human Rights in China

MADISON, WI—Rows of candles flickers on library mall of downtown Madison as human rights activists call for an end to the persecution of Falun Gong in China. Attendants of the candlelight vigil held on the evening of August 7, the night before opening ceremony of the Olympics, doubled in size as the night darkened.

According to the event organizers, the purpose of the vigil is to expose the intensified arrests and killings of Falun Gong practitioners the Chinese Communist Party is undertaking to “prepare” for the 2008 Beijing Olympics. Falun Gong is an ancient Chinese spiritual practice that aims to improve the body and mind. The practice has been persecuted by the Chinese Communist Party since July 1999.

Despite the past nine years of persecution, efforts to stop the persecution have not ceased. Anne Kirwin, a Falun Gong practitioner, described the importance of this cause for her, “I knew that with the attention of the global community, this is more important than anything else for me to support. We are hoping to be heard this time!”

Maureen Zebian, a high school teacher from Milwaukee who especially traveled to Madison for the vigil, said, “There are many practitioners in labor camps in China, and many of the camps aren’t far from where the Olympics are held. We are trying to bring awareness to the situation.”

The event commenced with several local Falun Gong practitioners, but soon doubled in size as Tibetan human rights activists and by passers sat down and lit up candles to support the cause.

According to the Falun Gong Information Center, since the start of 2008, at least 2,000 practitioners across 20 provinces and autonomous regions have been arrested by Chinese authorities in an effort to “stamp out” Falun Gong before the Olympics. In addition, the practitioners are being killed in custody faster and more frequently than pervious years.