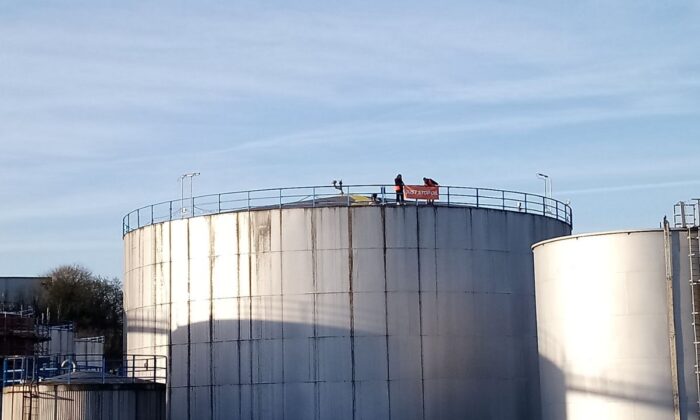 No. 10 Downing Street on Monday condemned eco-protesters’ “guerrilla tactics” as they continue to target oil terminals.

Since April 1, protesters from Just Stop Oil, with the support of Extinction Rebellion, have been occupying oil terminals across England, demanding an end to new oil and gas projects.

Activists have climbed on top of oil tankers, locked themselves onto pipeworks, occupied terminals, halting oil production and transportation.

A spokeswoman for Prime Minister Boris Johnson said, “We recognise the strength of feeling and the right to protest is a cornerstone of our democracy, but we won’t tolerate guerrilla tactics that obstruct people going about their day-to-day business.”

“We fully support the police who are putting significant resource into their response to the demonstrations,” she added.

On Sunday, Just Stop Oil activists occupied a tunnel they dug under a key tanker route to the BP Kingsbury Terminal in Warwickshire, as well as blocking two other oil terminals in Hertfordshire and Thurrock, Essex.

According to the group, a number of people remained in the tunnel by Monday morning, and up to 12 people were locked onto pipeworks.

The group said there had been more than 800 arrests during its protests between April 1 and April 10.

On Sunday, Oil Campaigner FairFuelUK said “credible intelligence” suggested one-third of garages had run dry of fuel, “particularly in the South.” Howard Cox, founder of the campaign group, later said he was convinced that the impact of the protests was “minimal and patchy” and that “the main, pumps are stocked well.”

Rachel Nolan, assistant chief constable at Essex police, which made 356 arrests since April 1, said on Monday that the police are not anti-protest, but “have been dealing with people who are trespassing into restricted areas holding flammable chemicals, posing dangers to themselves and others.”

Nolan added that some protesters were arrested on suspicion of criminal damage.

“Their risky behaviour cannot be allowed to take place in such critical locations which could be catastrophic if there were accidental or deliberate actions causing leakage or fire,” she said.

Nolan added that the protests were detracting from the day-to-day obligations of the police, and that the people of Essex “don’t deserve to have their daily lives affected in this way and for such a protracted length of time.”

In a statement on Monday, Just Stop Oil said their “hearts go out to all those who are disrupted,” but said they had “no choice but to enter into civil resistance until the government announces an end to new oil and gas projects in the UK.”

The group added that its supporters “will continue to disrupt until the government makes a statement that it will end new oil and gas projects in the UK.”