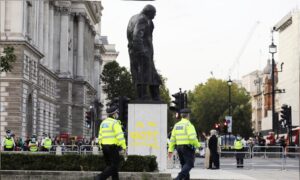 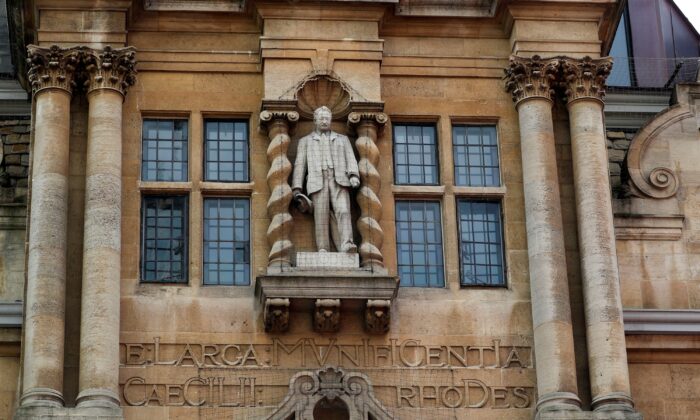 The statue of colonialist Cecil Rhodes at Oriel College, University of Oxford, United Kingdom, on May 20, 2021. (PA Media)
UK

Downing Street has warned Oxford University that it should take action if students are seriously affected by a boycott of Oriel College by academics over a statue of Cecil Rhodes.

According to The Telegraph, the group of more than 150 academics said they would refuse to tutor undergraduate students, do outreach work, or attend college-sponsored talks, seminars, and conferences.

The boycott came after the college’s governing body ruled last month not to remove the statue of Rhodes, who was prime minister of Cape Colony during colonial times and the creator of the Rhodes Scholarship, the world’s first graduate scholarship.

The Telegraph cited a petition by the academics saying they had “no choice but to withdraw all discretionary work and goodwill collaborations” after “faced with Oriel’s stubborn attachment to a statue that glorifies colonialism and the wealth it produced for the college.”

Robert Gildea, professor emeritus of modern history at Oxford and one of the signatories of the petition, told BBC Radio 4’s “Today” programme on Thursday: “One of the options offered by the commission was to retain and contextualise, so if the college put up a notice explaining who Cecil Rhodes was that would be fine. If the college put a placard around his neck at lunchtime today saying ‘Sorry’ that would also be fine.”

He added that sculptor Antony Gormley’s suggestion that the statue be turned round to face the wall is also a “very interesting idea.”

The boycott garnered criticisms from fellow dons and a number of MPs, with the most scathing of them all coming from Oxford alumnus and leader of the House of Commons Jacob Rees-Mogg.

“As regards the academics refusing to teach, I’m half tempted to say you should be lucky not to be taught by such a useless bunch, but if they are that feeble, what are you missing and what are they doing there?” Rees-Mogg said in Parliament.

He added, “We must not allow this wokeness to happen.”

Prime Minister Boris Johnson’s office warned that students will need to be compensated should they be affected by the boycott.

“Students rightly expect to get a good deal for their investment in higher education and we would expect universities to take appropriate action should any student be seriously affected by these actions which could include compensation,” a spokesman from No. 10 Downing Street said in a statement.

“We fully believe in protecting academic freedom but universities have a duty to maintain access to good-quality tuition as a priority, especially given the disruption the pandemic has caused students already.”

Oriel College’s governing body voted in June 2020 to remove the statue after protests by the “Rhodes Must Fall” campaign, which began in 2015 from the University of Cape Town, and was reignited at the time by Black Lives Matter (BLM) protests worldwide after the death of George Floyd.

It then decided not to remove the statue in May, citing “regulatory and financial challenges.”

In 2020, a statue of 17th century English slave trader and Bristol benefactor Edward Colston was pulled down and thrown into the harbour by BLM protesters in Bristol on June 7. A statue of Winston Churchill was defaced a day later, in another BLM protest in London, before it was defaced again in September during an Extinction Rebellion protest.

The UK government subsequently introduced a series of measures to protect the statues, including new bills with jail terms for damaging memorials, planning permission for demolishing monuments, and threatening institutions with funding cuts if they remove historical objects over protests.